If you know my work, you can skip to the buy link (or even click away…) now. If you don’t, I’m here to give you a little flavour, so you can make up your mind whether I sound up your street or not.
My first publishing credit was in 2009, in an anthology of stories by the much-missed Black Lace imprint called Liaisons. The story was called Advanced Corsetry and, like most of what I’ve written since, it had a decidedly kinky flavour.

My first full-length book, later that year and also published by Black Lace, was On Demand. I was so thrilled to have a real book in real shops that I didn’t stop to wonder whether anybody would actually buy it – but they did, and On Demand went to number one in the UK Amazon erotica chart. However, my kiss of success was also the kiss of death, as Black Lace shut up shop the very next month.
Undaunted, I went on to publish several novels for the indie new kid on the block, Xcite Books. My bestselling of these was The Business of Pleasure – a kind of anthology-novel about an agency catering to the fulfilment of women’s fantasies – followed by Meeting Her Match, which was about a woman’s exploration of BDSM and the ‘scene’.

Other publishers followed, such as Totally Bound, Carina Press and the HarperCollins Mischief imprint, who published several novels and novellas of mine. The most successful of those was Kinky, the tale of a chance meeting between a kink-curious woman and a charming Russian immigrant who has decided to earn his living as a professional Dom.

In more recent years, I haven’t been writing so much within this genre, but the mood still strikes me from time to time, and I was delighted when The Story of Jo was taken on by Sinful Press. Once again, it’s the story of a woman’s first plunge into the turbulent waters of a D/s relationship – but in this case, the relationship becomes thrillingly triangular. 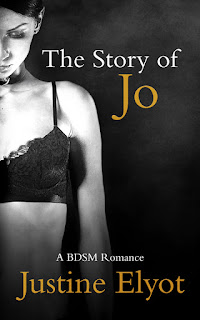 Blurb:
“I met a man called Emmett, and now I belong to him.”
Twenty-something Jo meets Emmett on a team-building course, and her initial disdain for him soon turns into attraction.
With Emmett’s strong but loving hand to guide her, Jo unleashes her inner submissive and they embark on an intense voyage of sexual discovery.
Their mutual fascination sees them exploring bondage, spanking, toys and more, and their romance is as perfect as Jo could hope for, until another man appears on the scene.
She knows that Emmett hero-worships his former boss and mentor, Charles, but when she finds out that Charles is the man who introduced Emmett to the art of domination, she has no idea how to feel.
With fierce desire growing between the three of them, can they find a way to explore this new dynamic without destroying what they already have?

“I want complete control of you in the bedroom,” he said.
The words shocked me to the core, and when I say ‘core’ I mean the area between my legs.
“Complete…control,” I repeated breathily.
“Within limits,” he amended. “Nothing that will damage or traumatise you, obviously. It’s for your pleasure as much as mine.” He laughed softly and ran a fingertip along my lips. “The look on your face…I’d like to photograph it.”
“Are you talking about, y’know, kinky stuff?”
“That’s exactly what I’m talking about. You look shocked. Are you shocked?”
Was I?
“No,” I said. “I mean…no.”
“So you are that way inclined?” He raised an eyebrow.
“In theory,” I said. “I’ve read…things. But never done…things.”
“But you’d like to do…things?”
Could I admit that I’d dreamed of a man like Emmett, who would come and take possession of my body and my sexuality, relieving me of the irksome responsibility? I’d dreamed of a man who would be dominant yet sensitive, cruel but loving, with a resolutely filthy imagination.
Did he actually exist?
And did I have the courage to find out?
He pulled me in close again.
“Do you want me to take you in hand?” he asked, his voice low and sticky in my ear.
“God, yes,” I shivered.
“Mmm,” his appreciative response turned into a kiss, one of those long, slow, trembly types that only end when your legs start to give way. One hand slid slowly down my spine, moulding itself to the curve of my bottom and squeezing.
“You’re still dressed,” he accused, his mouth still close enough for his hot breath to whisper over my skin. Red wine, spearmint, salmon, a bitter coffee note further back.
“Sorry.”
He quieted me with another kiss, then set his fingers to work on my shirt.

Make sure to follow the whole tour—the more posts you visit throughout, the more chances you’ll get to enter the giveaway. The tour dates are here: http://writermarketing.co.uk/prpromotion/blog-tours/currently-on-tour/justine-elyot-3/
a Rafflecopter giveaway
Posted by Lucy Felthouse at 10:35