Do you remember when you were just old enough to find sex intriguing, but not old enough for 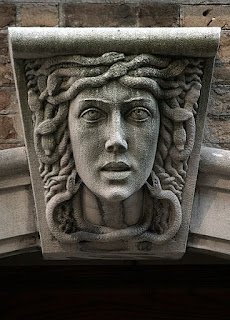 anyone to think you should be told anything about it? Well, that’s how old I was when I discovered Greek Mythology. Is there any place with more dark, illicit, totally forbidden sex hidden in every tale than mythology?

The mythological world is created through sex; people go to war and destroy whole civilizations for sex. In fact, seduction is what the bored gods are all about. No woman is safe. For that matter no man is safe from them either. And no kid just discovering how interesting their own bodies are can help but appreciate seduction by a swan, or a rain of golden coins, or the night visit from the monster one must never look at, but is one heck of a lover. I’m sure I’m not the only one who fantasized a whole lot more of the details than what my library books about the Greeks had written in them. As any reader knows, the best part of a good book is what we read between the lines in our own imagination. That’s true for writers as well, and that’s what led me to write the Medusa’s Consortiumstories.

Taking the stories from mythology to the next level is the subject of way more than a few really fabulous novels. Taking the romances into places those dog-eared, much loved, library books did not intend for a impressionable young mind to go is one of the best things about mythology. The stories are often little more than jumping-off places for very fertile imaginations … of all ages. That those stories still intrigue us enough for us to want to bring them into our modern world and imbue them with the characteristics of ourselves and of the heroes and heroines we admire attests to their archetypal power.

Speculating on what would happen if Medusa/Magda Gardener was actually alive and thriving today has been endlessly fascinating for me. What if she were more like a cross between a Mafia Queen and a female Nick Fury?  What would her gang of Avengers, her Consortium, look like and who would be in it -- gods, angels, vampires, succubae, demons? It’s my retelling, I can even add a zombie or two if I like.

In Buried Pleasures, the first book of Medusa’s Consortium series set in Vegas, it was especially fun to make Hades, the god of the dead and the king of the underworld as comfortable in the Vegas storm tunnels with the homeless as he is in an exclusive casino. Always the most brooding of the gods and the most isolated, tricked into taking over the realm of the dead, just how would this intriguing but secretive god go about living in Sin City, and why would he choose such a place?

Death being seduced, even as he seduces is a story I’ve always wanted to tell, and who better to seduce Death than the last of the sirens, who has an agenda of her own? Taking a myth and twisting it, speculating on what might happen, who might do what in the modern world, and what that might mean to everyone else is a wonderful adventure in writing. But I’ll be honest, I’ve had to give over all the control to the head of the Consortium, Magda Gardener. She calls the shots for her Scribes as well as for everyone else who answers to her.

Here’s a little teaser for you. 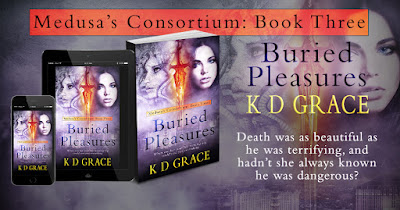 BuriedPleasures Blurb:
When Samantha Black shares her sandwich with a dog, his owner, Jon—a homeless man living in the Las Vegas storm tunnels—gives her a poker chip worth a fortune from the exclusive casino, Buried Pleasures. All Sam has to do is cash it in. Sam is in Vegas for one reason only—to get her friend, Evie Holt, away from sinister magician, Darian Fox, who holds her prisoner in an effort to force Sam to perform at his club, Illusions. A neon circus tent of strange and mystical acts, Illusions is one of the biggest draws in Vegas, and he’s hell-bent on including Sam in his disturbing plans.
The shadowy Magda Gardener will do anything to keep Sam from cashing in that chip. She knows that Buried Pleasures is the gate to Hades and cashing in the chip is a one-way ticket across the River Styx, which runs beneath the storm tunnels of Vegas. Jon is really Jack Graves, owner of Buried Pleasures, and Graves is really the god of death, himself, and if things aren’t already confusing enough, he and Magda know what Sam doesn’t. Sam is the last siren. That her song can kill is only the beginning of her story. Jon wants her safe on his side of the River, protected from Fox’s hideous magic. But even Death fears Magda Gardener, who is none other than Medusa, and the gorgon has her own agenda. If Sam is to understand her heritage and win the battle against Darian Fox, not only will she have to trust her heart to Death, but they’ll both have to work for the gorgon, whose connection with Sam runs deeper than any of them could imagine.

Buried Pleasures Excerpt – On a Slow Boat with Death:

“What’s going on, boss?” came the dry-twig voice from deep inside the hood. “We having a

“I need you to take me across the River,” Sam began, not giving Jon a chance to speak. But before she could present her argument or Shiva’s offer, the boatman gave her a deep chivalrous bow.
“Of course, Samantha Arielle.” Then he nodded toward the boat.
“But she’s not dead,” Evie said. “You told me you couldn’t take anyone who was still living, anyone who hadn’t cashed in their chip.”
“Samantha Arielle’s circumstances have changed since last I saw her. Besides,” he added, “this isn’t her first crossing.”
“What? What the hell do you mean this isn’t my first crossing?” She glanced over at Jon, who only shrugged, his brow drawn tight in confusion.
“Sadly, I can’t answer that. The pasts of the dead are not my concern, and their secrets not mine to keep. But,” he bowed once again. “You can come and go as you please. It’ll be my honor to ferry you across.”
“What just happened?” Magda asked Jon. “Did you know this?”
He shook his head. “The secrets of the dead aren’t mine to keep either.” 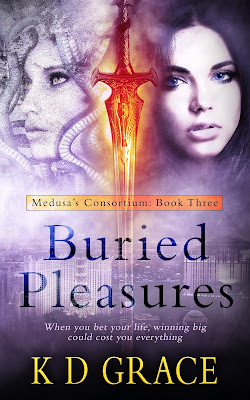 
“Perhaps not,” he replied. “But then until you, they—like I—believed that none of their kind had existed in the world of the living for a very, very long time.”
Posted by K D Grace at 07:30 No comments: