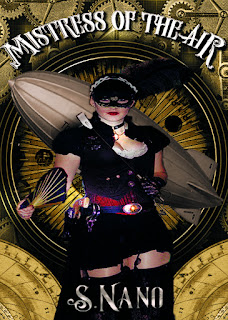 Steampunk is a fun genre to write in. It’s a mash up of history and science fiction, combining a Victorian past with new technologies. It’s also a world where women play a prominent role – where it’s possible for a woman to be an engineer, automaton designer, an airship pilot, a business leader or an adventurer. Lady Sally fits perfectly into this world.

Naturally, Lady Sally has her own airship, ‘The Corseted Domme’ on which she travels across the Empires of Europe, dropping in to visit her aristocratic relatives and friends for afternoon tea. She has two brass automations: Clarissa, a co-pilot for her airship and Borghild, a sex-doll.

She has an array of electric and steam-powered sex-toys to test out on the select group of submissive gentlemen who accompany her on the journey. Amongst them is an electro-vibrator modelled on a genuine Victorian device, neatly illustrating the Steampunk mash-up of the historical and technological. 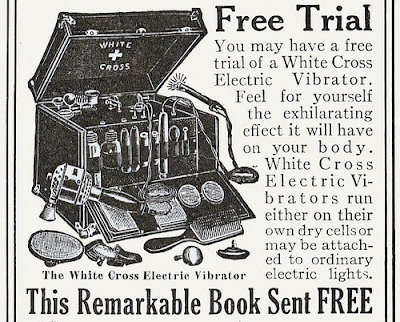 Not everything goes to plan though. Lady Sally has a tendency to upset people and she has to make some hasty escapes along the way. Y

“Oh, how exciting. This storm is quite turning me on!” Lady Sally exclaimed, ripping off the glass tube attachment and replacing it with a bullet-like brass fitting.

She turned the current down and the vibration up… right up high. She wriggled out of her satin knickers, plonking herself on her upholstered throne, desperate for release. The thunder rumbled… the lightning flashed… the brass object buzzed, as Lady Sally pressed it against her sex.

The giant airship rolled and rollicked against the gale, tilting dangerously as it forced its way onwards, its tip penetrating the dark folds of cloud.

“Oh my god, madam. We’re going to crash!” wailed Victoria from under the rack.

Oblivious to the storm, indeed, in tandem with the storm, Lady Sally pushed the whirring, vibrating object up her crack. The pleasure of using her new device along with the wild excitement of the storm meant she was sopping. She moaned in pleasure in time to the rumbling thunder, and thrust the throbbing object deeper inside her with each lightning strike until she could hold back no longer, breaking into a long, satisfying orgasm.

“God, that was good!” she exclaimed after she’d recovered.

She stood up, unsteady on her feet both from the exertions of her climax and the airship which was listing from side to side.

It was at this point cook appeared. She was confronted with Lady Sally, crotch sopping with juices, breasts hanging out, dishevelled black hair, wild-eyed, and precariously balanced on stiletto ankle-boots, holding a vibrating brass bullet.

“I can’t go on like this your ladyship,” she grumbled. “I can’t do any baking with this ‘ere airship thing rolling from side to side. And me jelly moulds have fallen on the floor; I’m telling you milady, they’ll all be dinted now.”

Cook, being considerably shorter than her employer, was eye-level with Lady Sally’s bare tits.

“But it’s supper time, cook. I could murder a smoked salmon and cucumber sandwich.”

Cook crossed her arms and pulled a face, “A sandwich. You expect me to make sandwiches in these conditions.”

There was another crack of thunder, followed at once by a flash of lightning. The airship listed sharply. Lady Sally tottered one way on her high heels but managed to keep her balance. The airship rolled to the other side. She teetered for a moment, then collapsed on top of cook, whose face became smothered in Lady Sally’s breasts.

She lay there for several minutes, cook crushed under her corset-clad body. The airship was still rolling from side to side with turbulence. Lady Sally had great difficulty pulling herself up, not being able to receive any assistance from her maid who was still a gibbering wreck underneath the rack. Eventually she heaved herself off the floor.

Cook gulped in a deep breath, “Oh my lord,” she exclaimed, “I’ve been suffocated by a pair of boobies!”

His second novel, ‘Mistress Of The Air’ was published by eXcessica on 21st April 2017.

Make sure to follow the whole tour—the more posts you visit throughout, the more chances you’ll get to enter the giveaway. The tour dates are here: http://writermarketing.co.uk/prpromotion/blog-tours/currently-on-tour/s-nano/