I’ll be the first to admit I don’t have nearly as many sexy dreams as I’d like, but then who does right? More often than not 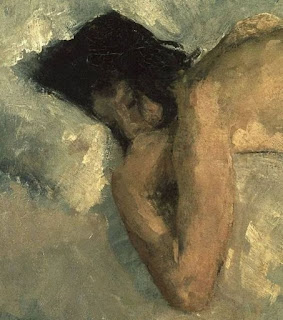 my dreams are mundane bits and pieces of detritus that make no sense and are just my brain sorting through the events of the day or the things that are on my mind. Oh I get my fair share of disturbing dreams, nightmares even, but not often. I also have those oldies but goodies in which I’m naked in queue at the super market, or I suddenly realize the toilet stall I’ve chosen is right on High Street with no door and no walls.

One of my very favorite classes in Uni was a psychology class that involved keeping a dream journal. At first I couldn’t remember anything when I woke up. Then my teacher suggested I keep a notebook by the side of my bed and set my alarm for every two hours. I was thrilled when I started remembering mundane bits and pieces. It didn’t take long until I was remembering multiple dreams and long, detailed sequences. I kept a dream journal for a long time after the class came to an end. I only stopped because it was beginning to take more and more time as I remembered more and more details. The thing about dreams is that everything can either symbolize something that could be important or, as Freud observed, sometimes a cigar is just a cigar.

I wrote The Psychology of Dreams 101 with that mix of sexy dreams and disturbing nightmares in mind. What happens when the dream that started out too hot to handle turns scary? And even worse, what happens when you’re not sure what’s dream and what’s reality?

Even when I stopped keeping a dream journal, in my regular journal, I still recorded powerful dreams, dreams that disturb me, or dreams that left me feeling like maybe I’d touched something deeper in myself. I recorded them and then I analyzed them and explored what they meant to me, what the Self was trying to communicate. I almost always found my efforts rewarding and enlightening.

That being said, I don’t think it’s much of a surprise that some of my stories have been inspired by dream I’ve had, or that dreams turn up in almost all of my novels and more than a few of my stories. The Psychology of Dreams 101 was simply a chance for me to play around a little bit with the idea of the dream as a driving force in story – in sexy stories in particular. Because of its nature, the emphasis in Psych of Dreams is erotic, but at the same time more than a little bit of nightmarish horror sneaks in. That’s probably not too big of a surprise considering the strange imagination the story came from. No worries though, there is happy ending, in spite of the twists and turns in the dream world. 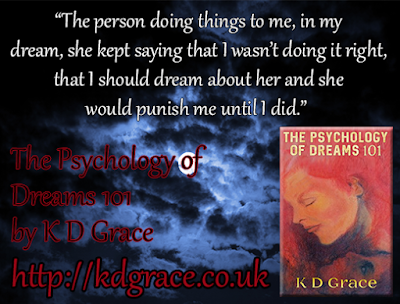 The Psychology of Dreams 101 Blurb:

What if there was punishment when you didn’t dream the right dreams? That’s the dilemma Leah Kent, and her professor, Al Foster must face—dream right, or take the punishment. The Psychology of Dreams 101 is a wander into the sexy and dark unconscious as Leah takes a Psychology of Dreams adult education class, only to discover that the required dream journal leads to some seriously kinky night journeys. But not all dreams are pleasant ones, and some have far-reaching repercussions in the waking world.

The Psychology of Dreams 101 Excerpt:

“Now then, let’s see if we can’t ease the pain in you lovely little bottom before we get on with the spanking, ” Dr. Clyde said before Leah could ask what he meant by his remark about them never getting out of the dream. He rummaged and rattled through the surprising abundance of the desk drawers until he came up with a tube of something she couldn’t see in her bent-over position, but as he unscrewed the lid, she immediately smelled peaches. There was the sound of something squirting, and then she felt the doctor’s large palm spreading cool lotion against her burning butt. She sighed and clenched at the pleasure of it. “There now. That feels better, doesn’t it hon? Just what the doctor ordered. We don’t want that lovely ass of yours too wounded just yet. Your punishment has hardly begun, after all.”

“Peach? Seriously?” Al said, coming closer to observe and sniffing as he did so.

“Yup! And it’s edible too,” Dr. Clyde said. “Taste. Not like that, Dear God, Al, put the tube down, and use your imagination. You’re in a dream for fuck sake! And you,” he turned his attention back to Leah, “you lie still. You’re being punished. You don’t get to see what’s happening. You have to trust the dream, trust that what happens next is all a part of the experience.”

“Enough of the psycho-babble, already, Derrick. We get it,” Al protested. There was a shuffling of male bodies behind her, and Leah felt a different set of hands, clearly Al’s hands. They were not quite as large as Dr. Clyde’s, but they were slightly calloused. She wondered how someone who taught courses on dream psychology got calloused hands. He gently cupped her hips, careful not to touch her wounded left ass-cheek. Then she felt the humid heat of his breath just before his warm wet tongue pressed against the place where her thigh met her left buttock.

“Oh God!” she managed, as the unexpected, but delightful, sinuous lap of his tongue up the rounded contour of her ass cheek moved inward, closer to the cleft that she knew would taste nothing at all like peaches. Meanwhile the doctor droned on that though at one point in our evolution, we liked the scents and odors of the body, at present that was less the case, and scented and flavored lubricants and lotions for sex often made the partners more comfortable with their personal smells.

“I like her smell,” came Al’s muffled reply. “It’s her I want to taste, not fucking peaches.”

“I ha’ a ‘en’ative nothe,” came the slurped reply against her ass, and she decided right then and there that she was just fine with that.

“I fail to see how eating her out is going to help ease the pain at all,” Dr. Clyde observed as Al licked and slurped and nibbled ever closer to the ache at the center that had nothing to do with the spanking.

“It’s my dream.” Leah protested, wriggling and squirming to open her legs against the restraint of the panties around her knees. “If I want him to do … that, then surely he should do that.”

“It’s hardly a punishment though, is it?” the doctor said, stepping back and folding his arms across his chest observing Al’s efforts from the edge of Leah’s peripheral vision.

“Who the fuck ca -- res?” she managed with a little gasp as Al fingered her open to make room for his very talented tongue.

She was just getting into it, just beginning to think that maybe Al’s tongue was prehensile when she heard a grunt and opened her eyes to discover the good doctor had moved closer, and he was now observing with his trousers open, his gaze locked on what Al was doing to her bottom and his fist locked around his heavy erection, which pointed accusingly at her ass as he shifted his hips to free his balls. Not that she wanted him to stop or anything, but she was just about to comment that she failed to see what his cock stroking had to do with her punishment when the sudden absence of a warm tongue from her nether region and the sound of a zipper opening told her that, in solidarity with his fellow male, Al had just freed Simba. She pressed her legs tightly together and wriggled just enough for the binding panties to drop to the floor. Then she kicked them aside and she was free too, opening her thighs anticipating more than Al’s tongue when the damn doctor called a halt to all activities.

“Now what?” Both she and Al growled at the same time.

“You’re not supposed to fuck her, Al. You’re supposed to spank her, punish her, make her repentant.”

Dr. Clyde ignored her. “Look, in the dreams, you’re both being punished. No one gets satisfaction until the punishment is complete.”

“Seriously?” Leah said, and Al cursed profusely. Under different circumstance to hear such foul language from the mouth of her mild-mannered instructor would have shocked her, but at the moment, she was inclined to agree with him completely.

“Well, I suppose I could have some satisfaction,” the doctor added with a little shrug of his broad shoulders, and the movement made his dick look like it shrugged too in its anxious agreement. “After all it’s not my dream and I’m not being punished.” Cock in hand, he insinuated himself between Al and Leah and with a quiver of anticipation, Leah wriggled against the table as he fingered her open. 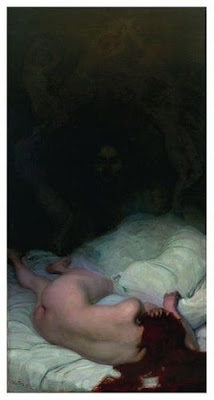 “Wait a minute,” Al said. “This is Leah’s dream. What if she doesn’t want you to fuck her? What if she just wants to get on with it?”

“No, no! That’s all right. I’m good with it. I’m fine.” Leah just wanted someone to fuck her and soon! Since it was her dream, why not the good doctor? He was certainly ready.

“What if I put my cock up your ass instead,” Al said, shocking both Leah and Dr. Clyde as he yanked at the waistband of the man’s expensive trousers.

Before the doctor could protest, Leah added her own bit of profanity to the blue language hanging in the air. “It’s my dream, damn it! So just put your fucking cock in his fucking hole already! I don’t see how that can affect my punishment. And when you do, I want to see, so Doc, if you’ll just hand me the mirror.”

“It’s my dream,” Leah repeated, “Besides,” she added quickly, “I’ve never seen a man fuck a man before.”