Sex in Sci-fi by Jennifer Denys

They say your screams can’t be heard in space… Unless you have a partner or two! Eleven authors take you on a trip where any pairings are acceptable, locations vary from spaceships to strange and futuristic worlds, and interesting and exciting objects can be used in sex play.

If randy astronauts, virtual reality lovers, sex in near-death situations, a commitment-phobe human and her alien lover, and reproduction in space experiments don’t do anything for you, you are clearly not human!

So try the stories in the alien worlds half of the anthology, instead. Here you’ll find alien Doms, a mysterious gladiator saving a stricken princess, an exotic dancer, a paid assassin on the run, an illegal sonic dilda’tor, and a pleasure booth. Space has never been so exciting! 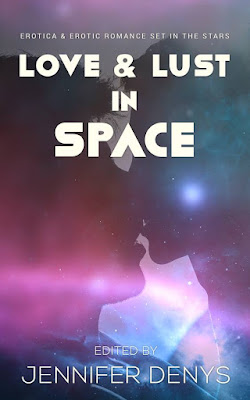 ‘Love and Lust in Space’ came out of a workshop on ‘Sex in Sci-fi’ that I did for Smut by the Sea in May 2016. I had some terrific submissions which fell into two distinct groups: futuristic earth stories and those set on alien worlds. So the publisher and I decided to split the anthology into two halves along those lines with an epilogue story which covers both areas.

Randy astronauts litter the pages of the first half – not surprisingly since this is called ‘Love and Lust in Space’! We have two male astronauts on the space station who lust after the (female) doctor monitoring them from Earth in Naughty Nauts by H K Carlton; Ian D Smith wrote a story (Re-entry) about sex between astronauts who are friends stuck in a near death situation; Filling the Void by Jordan Monroe tells of a reproduction in space experiment.

Across both halves of the anthology there are intergalactic relationships including an alien from the planet Steelt who is a member of the ambassador’s staff about to leave Earth when an Earth woman spies him across the room (One Night by Rose Wulf); Ella Gray brings us the story of a man on the run who leaves his home world of Jubbal in Across the Stars; and landing on the planet Ferrix after being sucked through a wormhole is a nightmare for the human heroine in The Audition by Ashe Barker, as the women are all submissive and the men all Dominant.

Interestingly, there is a common theme of kidnap, abduction and being restrained. An assassin is on the run about to be caught in Across the Stars; Morgan King tells the story in The Gladiator’s Princess of a princess caged in readiness for breeding when an alien warrior comes to her rescue, but his motives may not be altogether pure; and a hacker comes across a mysterious and sexy woman handcuffed in a virtual reality programme in Dee Maselle’s story, Sanctum.

Naturally, we have a few anti-gravity stories: the characters in Re-entry try it out both with and without gravity and realise that shapely breasts and anti-gravity are made for each other!; whilst the heroine in Filling the Void has to hold onto to straps but being sandwiched between two guys helps, I am sure. I found this very amusing as this was one of the issues I talked about in my workshop having done research for a previous story. A problem which has been highlighted by researchers is that the lack of gravity leads to lower blood pressure which could, in turn, lead to lack of blood flowing to the gentleman’s penis and – to be exact – he may not be able to get it up! However, as we write fiction we can get away with it! H K, though, decided to go with realism. Her astronauts in Naughty Nauts couldn’t get an erection but they sure made up for it in their smutty banter!

Various sex objects are invented by the anthology authors – Jennifer Denys came up with a sonic dilda’tor which the heroine in her story discovers could be the answer to her prayers, unfortunately it is banned on that planet! (in The Sonic Dilda’tor); Beverly Kingland created The Pleasure Booth for her story of the same name which is excavated by aliens on earth long after humans have ceased to exist; and there is an orgasma orb in Dylan McEwan’s story Alien Attraction (all I can say is this is an MM story so you can guess where it goes!).

Voyeristic sex can be found in a few of the stories. The heroine in The Audition has to cope with multiple partners one after another whilst the others are watching; in Alien Attraction the human hero is an exotic dancer and he and his fellow humans perform more than just dancing for their Vordellian masters in the bordellos – but these aliens are only allowed to watch not touch; in the futuristic Earth of Sanctum they have an entertainment industry using immersion tanks which allows people to enter into virtual reality scenarios (and even have sex there); and on the world of The Gladiator’s Princess the only way to incite arousal is to watch the princess being brought into heat whilst on display in the arena.

Lastly, sexual cultures differ between planets. The aliens of One Night don’t take love lightly. They wait until they meet the right one – and know the right one from instinct. The heroine in The Sonic Dilda’tor has to have semen in order to ascend to the highest level of orgasm, meanwhile the narrator of The Pleasure Booth has problems understanding how humans could find sex pleasurable – she sure finds out.

Discover that for yourself, and so much more, in Love and Lust in Space. Release date 10 November. Buy link: https://mybk.li/llis
Posted by Lucy Felthouse at 09:00