Carl Jung saw symbols and rituals as containers for numinous power. It’s a small step from our need for ritual to the idea 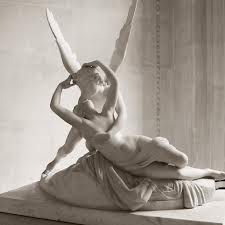 of sex as ritual. It infiltrates our myths, it permeates our literature and it fills our fantasies. Many of the earliest religious rites were fertility rites involving either the sacred prostitute or the sacred couple whose sexual union insured abundant crops, cattle and children for another season. Certainly it’s not hard to see the ritualistic aspect of sex in the natural world. We’ve all watched birds or badgers or elephants going at it on nature programs. There are often complex courtship rituals before actual copulation.

Jung’s definition of ritual as a container for power intrigues me. The power contained in sex is astounding. It’s the power to pass on life. It gives us the ‘little death’ and the out of body experience. It elevates us to the level of heaven while bringing us back to our most primitive animal nature.

Sex is the ultimate mystical experience. The closest we can get to a power beyond ourselves is the power within ourselves. There’s a reason I chose to write my very first novel, The Initiation of Ms Holly as a modern day retelling of the Psyche and Eros story. In the Greek myth, Psyche must undergo ritualistic tasks before she is allowed to be with her lover Eros. In achieving these impossible tasks, Psyche so impresses the gods that they not only allow her to be with her lover, but grant her divinity as well.

In Greek mythology sex usually involves one of the gods, most often Zeus, coming down to earth and ‘seducing’ a mortal female, who then gives birth to a child destined to do great things. Sex as the representation of the creative force permeates the Greek myths. It permeates the paranormal world as well, but what else are vampires and shifters but the modern representation of the mythical gods? It’s there in the Christian myth as well, the child of divinity and humanity destined to save the world. Tragically the power of sex is most of the time omitted from the Christian myth. Oh it’s there all right, but you just have to look a little harder to find it. When I wrote In The Flesh, one of my favorite scenes is Susan’s research into the sexual relationships between gods and humans. Here’s a snippet to illustrate what I mean:

I had little enthusiasm for the handbag sale, nor for lingering at the make-up counter. Instead I found myself back at the Starbucks, Mac open, researching God’s love life, which turned out to be a long history of seducing humans.
Zeus visited Danae in a shower of gold. He seduced Leda in the form of a swan. Eros came to Psyche in the dead of night forbidding her to look upon his face. Hades dragged Persephone down to the Underworld. The Virgin Mary was impregnated by the god of the Bible. In the New Testament, Christ is the bridegroom, and the church his bride. And the list went on and on. Perhaps even the indwelling of the Holy Spirit was just another way for divinity to experience flesh.

More than a procreative force, sex is a creative force. Its ritual act allows us contact with the power, contact we can have no other way. But who controls the ritual? We’ve all seen lories transporting heavily reinforced tankers bearing CAUTION: HAZARDOUS MATERIALS signs in big red letters. We know a breech of containment would be disastrous. The purpose of ritual is to keep the power contained so we mortals can interact with it safely. Religions have always tried to control the rituals involving sex, to dictate with whom the act may occur, how, and even when it may take place. Property and inheritance rights depended on controlling women’s sexuality.

These days the ritual containers set in place by religious superstition and prejudice are being breeched. Those vessels can no longer contain and control sexuality in all its vibrant varied guises. The ritual is being taken out of the hands of institutions and reclaimed on a more individual, more personal level. That means the creative force of our sexuality is being freed in ways we could have hardly imagined a few years ago.

Email ThisBlogThis!Share to TwitterShare to FacebookShare to Pinterest
Labels: psychology, sex and myth, sex and ritual