Some might say that the dismissing of older women as sexual beings is all based on the loss of their fertility, but that only stands up if you believe the sole purpose of sex is reproduction and that human beings (or, simply, heterosexual men who are still often taken as the default setting for ‘human’) sense this on some deep primeval level. Sex has always been far more recreational than procreational once you step outside the extremely narrow definition of ‘sex’ as penis-in-vagina-until-penis-ejaculates. Not that there’s anything wrong with a bit of PIV, of course…

When I put out the call for Silver Desire, asking for stories that focussed on a woman over the age of 50, I did have a personal interest as I am over 50 and don’t consider myself sexually obsolete. I wasn’t entirely sure what would be sent in and, yes, there were a few rather derivative naughty-older-housewife tales, but the majority of submissions were wonderful. There are a couple of stories which acknowledge that mortality is a bit more of a consideration for older people without being gloomy about it; some which describe an erotic renaissance for women who had come up against society’s negative few of the aging female, along with several helpings of kinky, bawdy, joyous fun. 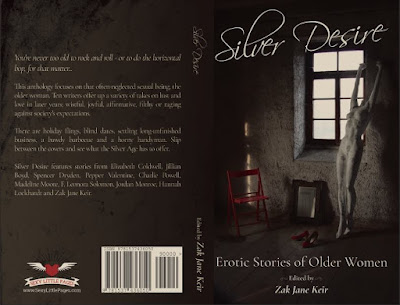 Here are three little teasers from three of the stories included in the anthology.

From The Boys In The Band by Zak Jane Keir

Hadn’t there been times like this in the 80s and 90s, when phone numbers got lost and addresses were never swapped, so you had to take things as you found them?

‘Back in the day…’ Alex kissed her forehead. ‘I remember, I sometimes used to get up to all sorts with girls I met at gigs, straight after coming off stage, pretty much.’

‘We all did a bit of that,’ Martha said. ‘Us girls. It was part of the fun. Up against the wall, in the back of the van…’

‘In the phone box round behind the Ace of Clubs,’ he said, and she giggled, in a way she hadn’t done for over a decade. ‘As long as you were the right height for each other, and no one came and banged on the side of it, wanting to call a minicab!’

He kissed her properly, then, the tip of his tongue darting in and out between her parted lips. She knew she was wet, and her skin was prickling with arousal. The smokers had either gone home or back to the bar; the pub’s tiny garden was deserted. A few feet away, a trellised archway led into the darkened car park, and they both glanced in that direction.

From Gloss by Charlie Powell

She winces. She hates being on the receiving end of oral. It gives her too much time to get lost inside her own head, and not in a good way. This is one of the best things about being older – she’s had the time to work out what she does and doesn’t like and, unlike in her twenties and even her thirties, she’s not afraid to say so, either.

“Not really my thing, I’m afraid.” She’s not frightened to say it, but toning down her bluntness is something she’s still working on. Some projects last a lifetime, she thinks.

“Oh, ok.” He seems surprised, but he says, “What is your thing, then?” and she replies, “Showing you that your mouth isn’t the only thing I plan to give a good coating of gloss to.”

“I wasn’t joking,” she says, and then something gets the better of her – maybe boldness, maybe just all the wine they drank at dinner – and she shuffles him back even further into the doorway and drops to her knees, her fingers eager and decisive as she gets to work on his belt.

His cock is thick, and solid, and her mouth waters at the sight of it. This is what she’s missed about sex in recent months. Not the orgasms – she can take care of those herself – but the sheer physicality of cock. So much of her life is about ideas, thoughts, feelings, and it’s a relief to have it reduced, even if just for a few minutes, to the simplicity of hot, hard flesh.

From Stella by Hannah Lockhardt

“Kenny and I only married just before we moved here. He's my fourth. Husband, not... I've had a lot of men.” she interrupted herself, with more than a little glee.

“But he was an old flame, showed up when suddenly the internet wanted us to reconnect with old schoolfriends, and past lovers. The one good thing to come out of it.” The smile shifted to the complacency of pure love. “He does me right. He reminded me of my career choices before the husbands, before the kids, my other life. And you know what? I'm just as desirable now as I was 40 years ago. Maybe more so. No one tells you that about ageing. That the lie of diminishing interest is just that. “
There was a pause, then they both laughed. Stella popped the head of the toy between her lips, as she had done with Brian's cock, minutes before. He watched her slide more and more of it inside, until only the black, mechanical base was visible. When she pulled it out, the shaft was slick and shining in the harsh bathroom light. 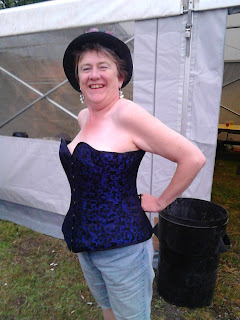