Not so long ago, romance novels were traditionally thought of as the typical bodice rippers we saw on the Mills & Boon shelves in our local bookshop. They’d depict rugged men and flawless heroines, in some state of undress, on the book covers.

A lot has changed since those days, and I think romance has become a far deeper genre than it ever used to be. Yes, it has the connection between two people at its centre, but it also deals with some very real topics, and, in turn, I think the characters are becoming more realistic, too.

If you’re looking for the Mills & Boon of today – the millionaire stories of beautiful people coming together – then you won’t want to read my books. I write about people who are not just imperfect, they are often disfigured or damaged in some other way (and I don’t just mean the ‘my parents left me and no one loves me’ damaged).

In my most recent novel, No Second Chances, my female main character is a veteran, and she’s returned to her home town not only suffering from Post Traumatic Stress Disorder, but also missing a limb. In my dark romance novel, Defaced, which is the first of a trilogy, my main male character has a birthmark so disfiguring, his father does not allow him to leave his house, and calls him Monster. In my BBW novel, Cut Too Deep, my female main character, Jenna, is curvy and self-conscious of it, but she is also sporting a number of terrible scars from a car accident, and has internal injuries too.


Even in my current work in progress, Dirty Shots, I’ve discovered the main character has an illness I was pretty much unaware of throughout most of writing the story.

Writing imperfect characters is important to me because I believe we're mostly imperfect, too. Even the most beautiful people who appear to have perfect lives, are also carrying their own insecurities and unhappiness. For me, this just makes them more interesting.

Keep reading to see how I describe a couple of my characters from the books I mentioned earlier.

Excerpt from Cut Too Deep 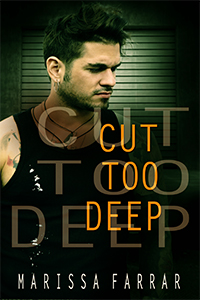 Jenna studied every inch of herself. She cupped her large, heavy breasts in her hands, lifting them up to imagine what they would look like if they were round and perky like the women in the magazines men seemed to love. She sucked in her stomach as best she could, then let it out again with a huff. She grabbed the folds of flesh around her middle, pinching the rolls as if she could cut them off with pretend scissor fingers. She twisted to look over her shoulder, at the further folds mid-way down her back, and the expanse of her backside, at the thickness of her thighs and the dimples that covered them.
Once her inspection of her fat was complete, her gaze moved to the huge, twisted scar that ran from the mid-point of one side of her back, right around her waist, to just above her groin. The doctors had done the best they could to stitch her back together, but the scar still appeared like a giant red and white welt, as if she’d literally been cut in two. That wasn’t far from the truth. The metal of the passenger door had folded upon the truck’s impact and sliced into her torso. She’d barely survived. 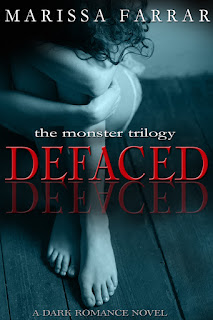 Her mind was in a jumble, trying to take in the two opposing things she saw.
Monster stood before her, regarding her with solemn, chocolate brown eyes.
His beauty struck her like a blow. He had a smooth, square jaw, a straight, sculpted nose, and wavy dark hair cut short and swept back from his face with some kind of product. His high cheekbones and full lips gave him the appearance of a model, a beauty that was almost unworldly. He was smartly dressed in a grey suit with a white shirt beneath, and black dress shoes which shone beneath the artificial light of her room.
But her eyes took in the part of him she couldn’t ignore. Running down the center of his forehead, down the left hand side of his nose, to skirt the corner of his sculpted mouth, was the darkest port wine birthmark she’d ever seen. Where most of those kinds of birthmarks were red or purple, his appeared to be almost black.
Years of training herself to not react to the birthmarks of her patients allowed her to hide her initial shock and dismay.

If you'd like to read my latest book about another imperfect person, you can pick up No Second Chances from most online book store. The paperback and audiobook are also on their way! 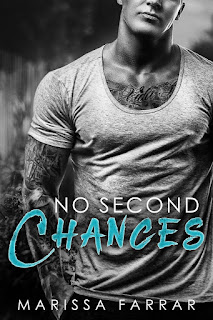 Gabi...
When I was seventeen years old, I was told to stay away from Cole Devonport. Kids like him only ever meant trouble. I should have listened, but I didn’t, and surprise, surprise, I was the one who got hurt. But escaping Cole didn’t mean the end of my pain. Life has a way of screwing me over, and after joining the Army as a way of forgetting him, I suffered a loss I’ll never recover from.
So now here I am, back in the town I ran away from, with my alcoholic father apparently looking after me.
The last thing I need is Cole showing up on my doorstep because nothing has changed—with his prison tattoos and don’t-screw-with-me edge, Cole Devonport still means trouble...

Cole...
I let everyone down all those years ago. I made mistakes and I’m not proud of them, but I’ve done my time and now I just want to keep my head down and get on with my life. I thought I was doing exactly that until I heard Gabriella Weston was back in town.
Despite what she thought, I was always in love with her. She might hate me, but whether she knows it or not, she also needs me.
I want to make it up to her, but with my past still trying to pull me down, perhaps it would be best if I just stayed the hell away like she keeps telling me to. Problem is, I can’t seem to resist her, and I’m the type of guy who always gets what he wants...

‘No Second Chances’ is a stand-alone, second chance, contemporary romance. It is a full length novel with no cliff-hanger!