Please welcome the lovely Elena Kincaid to the Brit Babes blog today, take it away, Elena... 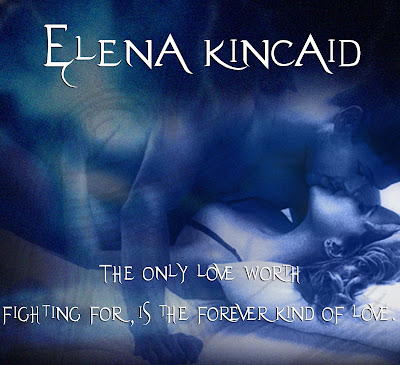 Today I’d like to talk about my newest release, THE SHADOW, part of the Dark Captive Anthology releasing May 20th from Evernight Publishing.  I am so thrilled to be a part of this along with my fellow authors Jenika Snow, Lily Harlem, Alexa Sinclair, N.J. Young, and Jocelyn Dex. 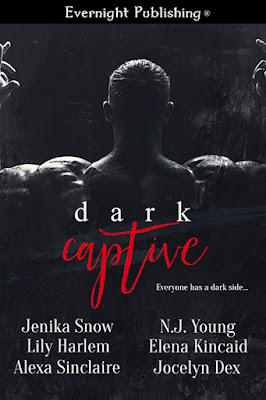 Everyone has a dark side…

He came out of nowhere, like a shadow hiding in pitch darkness. Could he uncover the whole truth before he sentences her to a fate worse than death?

Exploring fetishes through characters, whether or not they’ve been tried or were just products of my overactive imagination is just one of the many advantages to being a writer and getting to live out fantasies vicariously.  Same goes for reading.  Kind of like try before you buy.  Pretty awesome, I think.

THE SHADOW was me stepping out of my comfort zone and writing something much darker than I usually do, even though I do sprinkle a whole lotta angst to my stories. The characters were both flawed with scarred pasts and I had so much fun uncovering them before stripping them all away. 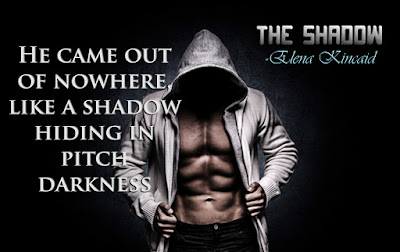 He came out of nowhere, like a shadow hiding in pitch darkness and turned Emily’s world upside down.  Was she a victim of circumstance or part of a more sinister plan?  After fighting, begging, and even praying for her freedom fails, she is given a choice … succumb to her Shadow’s commands or die.  What Emily did not expect, was her unexplainable desire for her captor.

Brody Beckett thirsts for revenge.  He wants those who wronged him to suffer, to bleed, and he’ll stop at nothing to achieve his goals.  The last thing he needs is to go all soft on the beautiful woman who stars in each and every one of his nightmares.  When doubt and suspicion seep in, Brody wonders if he could uncover the whole truth before he sentences Emily to a fate worse than death.

His hands roamed further down until they reached the waistband of her dark blue slacks. He toyed with her, slipping his fingers inside her pants to just the very tip of her pubic hair and then back up, until finally, on his next pass, he spread her lips with his ring and index finger and shoved his middle finger inside her core. He gave her another smug smile. “You’re very wet, princess.”
She was. She could sense it and she felt ashamed.
As if her Shadow became aware of her shame, his smile fell away and he removed his fingers and stopped touching her completely. He looked angry. He got up wordlessly and left the room again, taking the camera with him.
The next time he came downstairs, he resumed her pleasurable torture, and the next, and the next, each time playing her body more boldly and bringing her to the brink before leaving her unsatisfied. He massaged her bra-clad breasts in turn while his other hand flitted around in her panties, picking up quickly on all of her sweet spots. Two fingers massaged the front wall while his thumb drew small circles around her clit. His movements were masterful, relentless, like a good lover about to deliver an earth-shattering orgasm to his woman. It seemed he could sense when she was just moments away from achieving ecstasy despite Emily trying to stubbornly hold back and she would have come hard for him had he not immediately ceased his actions. After giving her a few minutes to cool off, he resumed the same torment. Over and over, impossibly bringing her to the brink each time, and then stopping right before she could climax.
“Stop it!” she cried out. “Please just stop it.” The last plea was only a whisper, followed by more tears and whimpering. Truth be told, she wasn’t sure if she was begging him to stop touching her, or to finally let her come.
Despite her outburst, Shadow, however, seemed less angry … more satisfied with what he had caught on camera this time she assumed. She had remained obstinate, giving no emotion away the last few rounds, so her breakdown would no doubt entice Louis to come rescue her.
Shadow took the camera and left the room again wordlessly. This time he left the light on for her. Whether by accident or on purpose, she could not be certain, though she concluded that he never did anything by accident. He had given her a small reward.

She was born in Ukraine and raised in New York, where she currently lives with her daughter.  She graduated college with a BFA in creative writing and In addition to writing, she also started a graphic design business a few years after graduating.  When not working, Elena loves to spend time with her family, travel the globe, curl up with a good book, and catch up on her soaps.