Korey Mae Johnson write an article for Spanking Romance Reviews with this title a few years ago talking about her experience with her husband in becoming a "little". I remember reading it at the time and thinking "that's not for me." I didn't judge, but I didn't think I "got it." I didn't choose to read ageplay books and I had no interest in exploring it in real life.

Except maybe I did. After I read a few ageplay books, it all became infinitely clear (and enticing). As a lifelong kinkster, I always had fantasies of spanking. When I was younger, they did involve a "Daddy" figure. Certainly not my own father--nothing incestuous, but yeah. A daddy figure. As I grew older, the fantasies changed into more of a boyfriend, then husband type figure, but it makes sense that that the "Daddy Dom" would still appeal to me and other lifelong spankos like me.

There is a lot of stigma or taboo around ageplay, so that's where the tiptoeing comes in, I think. I know when I started writing my first ageplay (Her Hollywood Daddy) I felt nervous about getting it "right". Yet I also wanted to do it my way. I'm not someone who thinks you should leave sex out of ageplay, because to me, it's a sexual fetish--the daddy talk turns me on, and by never mixing sex with it, you're saying it's wrong, that there is some pedophilia element (psychiatrists have said definitively there is NO RELATION between ageplay and pedophilia).

Even when I wrote His Little Lapis (my third ageplay) I had a moment of panic around the sex/daddy talk--worrying that readers would take it the wrong way. I think it's also a challenge to write a character who's into ageplay who doesn't come off as "silly" or well..."childish." I noticed I had a one-star review for His Little Lapis that called it silly. Don't rush to console me--I know my work isn't for everyone. But I sort of think it's one of the pitfalls of writing ageplay. You're talking about an adult who likes to play a child role. Of course it's silly! There's freedom in that silliness!

These days, even big name romance authors are tiptoeing into writing ageplay. Evangaline Anderson's Daddy Issues (which I see is on Amazon but not for sale--I'm hoping it hasn't been put in the Amazon dungeon for some reason) is one.

How about you? Does ageplay make you uncomfortable? Do you "get" it? I'd love to hear from you. 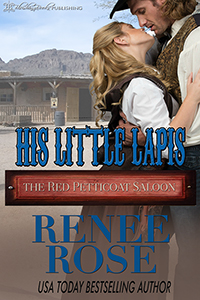 Once a respectable young governess, Louise Small tumbled from society’s grace after her employer forced himself on her. She wound up at The Red Petticoat playing Little Lapis Lazuli, a submissive who dresses like a girl and offers her bottom up for frequent spankings.

She enjoys her new identity, so far removed from the prim governess she’d been, but she longs for a real daddy—one who is kind and caring, yet willing to administer real discipline. When she spies Culpepper Cove's Mayor interacting with his young niece, she knows he's just the sort of man she wants. But his disdain for her and her profession put them in conflict.

Letting go of her little self, she reverts to the proper, fine-mannered governess to win his attention. But at what cost? Her little side squashed, she must give up hope of being taken in hand. Will being the Mayor's wife be enough?