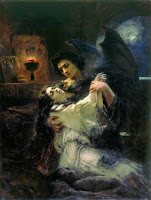 I don’t know if any other writers notice recurring themes in their novels and stories and wonder about the psychology of those themes, but I do. I’m pretty sure that the enormous navel-gazing tomes of journals I used to write now work themselves out in my stories, and so much the better, I think. Certainly it’s more creative and more fun. Speaking of recurring themes, it hit me just recently that I seem to write a lot about demons. Almost all of my paranormal erotica has to do with demons in one way or another and, as I finished up my online serial, In The Flesh, in which a demon plays a prominent role as said demon will do also in the sequel, Blind-Sided, I found myself wondering just what my writing so much about demons says about me. Some of my stories are about exorcising the demon, getting rid of it completely, but most are about embracing the demon, or at least finding a way to live with it. Personally, I’m inclined to think that the latter is by far the most practical method of dealing with demons in real life. In real-life, unlike in fiction, they’re not that easy to exorcise.

We all have them, and demons come in as many varieties as there are people. We writers have more than most, I think, though I’m sure in my case a lot of my demons are linked very tightly to the fact that I’m just flat out, majorly, neurotic. Oh I’ve definitely tried exorcising them, but I’ve actually found that exercising them works better. No … seriously, I sort of take the old adage ‘working out my demons,’ literally. I take mine out for a nice long walk or invite them to be my guests at the gym to sweat it out with the kettle bells, and it seems to suit them down to the ground. I guess maybe it wear them out enough that they forget to torture me. Or maybe

after the endorphins have kicked in and we’re all well sweated and relaxing with a good protein shake, I just don’t notice their torment so much. But the truth is, they can often be quite useful -- my demons.

Having said that, I guess it shouldn’t come as any real surprise that I write about demons so much. If there’s anything my demons like more than to be exercised, it’s to be the center of attention in a novel or a story. Frankly, I don’t think it matters if I’m writing about demons in the literal sense or if I’m writing about the less paranormal, more concrete demons my characters battle. By writing the story, but exploring the things that frighten me, the things that make me uncomfortable, I think I’m finding a healthy way to live with those inner demons. As neurotic as writers tend to be, the truth is that the best place to write the most powerful stories is right smack dab in the middle of the neuroses – the scarier, the more irrational, the more chaotic the better.

Telling a story is another way of exercising my demons. I make them work for me instead of against me. In truth, I don’t suppose I “make” them do anything. I think maybe they wanted to be put to the challenge all along. Don’t get me wrong, they seldom make it easy, and they’re often uncooperative. They often make it as difficult and as uncomfortable as possible for my characters and they often make the telling of my characters’ tale as squirmy and uneasy for me as they can. What the hell else is a demon supposed to do? 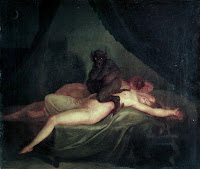 Writing with demons … there just might be a book in there somewhere. Oh, wait a minute, I just wrote one! Anyway, my point is that sometimes the things that cause us the most stress and make us the most fearful are the things that not only make for the best fiction, but the fact that we do write from the place of our discomfort makes the writing all the more powerful and the personal demon all the more bearable.

The other thing about demons is that they seem so much less terrifying when I’m writing my brains out with a story that won’t let me rest until it’s finished. It’s almost like there’s no room for demon intimidation when I’m in the grip of a tale needing to be told. For that bright and shining span of time it almost feels like instead of the demons possessing me, I possess them. Perhaps that’s the true story I was trying to tell with In The Flesh. Perhaps our demons don’t possess us so much as they drive us, and if we can just figure out how to buckle up and go along for the wild ride, then living with demons, writing with demons – paranormal or otherwise -- can actually be useful.

Email ThisBlogThis!Share to TwitterShare to FacebookShare to Pinterest
Labels: demons, the psychology of writing fiction