Aliana Drake: How my Second Book Changed My Life


I bet you had to reread the title a few times. The second book? Most people assume a first published book changes an author’s life.


There’s no doubt that holding my own first book in my hands was a feeling I’ll cherish forever. But in the months following the writing of my second book, I realized the awesome power of writing, of literature, and the amazing power it had to introduce a new path in my life.


In order to understand how it changed me, a story, of course, is needed. My husband and I took our four year old daughter on a vacation to to see family and to research the location for my four-book series set in the mountains of . We hiked, we ate local food, and we drove through .


We spent one day in where we hiked around beautiful red rock formations in a public park called The Garden of the Gods. As we scrambled up rocks and boulders, we realized that there was a pair of rock climbers half way up a large sandstone rock formation called the Kissing Camels. We perched ourselves on a rock and ate lunch while we watched in awe as they climbed the sometimes vertical rock face, working together with ropes, harnesses, and other gear we didn’t have the language for to get to the top. There was so much trust, a harmonious, sometimes unspoken language between them as they inched up hundreds of feet of bright red sandstone.


“I want to do that,” our four-year old said. My husband and I, of course, explained to her that they have a lot of gear, training, and knowledge we didn’t have. She was disappointed as you can imagine, and my husband and I good-naturedly laughed it off (if you’ve ever been a parent, you know that kids say they want to try something every 10 minutes). Given that we live in the flattest state in , we never gave it a second thought.


That was until I started brainstorming ideas for my second book. Something in me couldn’t get the image of those two climbers out of my head. So much trust. So much communication. Ropes…harnesses…you get where I’m going. Wouldn’t it be fun to base a romantic relationship off the mutual love of rock climbing? From that, my characters Jenn and Declan were born.


But I had one problem…I knew nothing about the sport. So I ordered books, talked to local climbers, and started to piece together how one even goes about rock climbing.


One day, as I was sitting at my desk typing, my daughter came over and started flipping through the non-fiction books on rock climbing. I watched her as she flipped through the pictures, scanning each one like she was memorizing it. Finally she turned to a certain page with a full color photo. I will never forget the look on her face, her eyes wide in admiration as she pointed at the picture. Then she said something that rocked me: “Look, Mommy! A girl can do it, too!”


I pulled her into my arms, tears pricking my eyes. “Of course girls can do it, too,” I said. It was in that moment that I vowed as a family we’d go rock climbing. We found a local gym that would allow her age. My husband was thrilled to go. Me? Not so much. I had never had a need to climb a forty foot wall. But I did it for my little girl.


Within the next few months, we realized our entire family had fallen in love with the sport. Now we climb three to four times a week at multiple climbing gyms. We take trips around the country just to experience other gyms. Our daughter has a coach because she is a natural-born climber. She begs to do it every day and plans to compete when she’s allowed to at seven years old. I’ve seen her problem solving and self-confidence grow. I’ve seen how fiercely competitive and driven she can be to get up a route set for adults.


And I’ve seen how it’s changed my relationship with my husband. I know what it’s like to be up a thirty-five foot wall on the hardest route I’ve ever done. My arms are pumped, my legs are shaking, yet I have the hardest move right above me. Everything in me wants to quit, but I can hear his voice down below as he belays me from the ground. He’s encouraging me. He believes in me more than I do. The trust I have in him to catch me on the rope if my hand slips off the tiny hold emboldens me. So I gather the courage to try the move. The tendons in my fingers protest, but in seconds, I make it to the top. He lowers me to the ground, and we share a high-five and a kiss that romance novels are made of.


So rock climbing has not only changed my daughter’s life and enhanced our marriage, but it’s brought me a new level of confidence I never would have sought out had it not been for the second novel.


Oh, and a chance walk around the Garden of the Gods. Did I mention we’ve already booked our vacation for this summer? And this time, we’ll be the ones climbing those rocks. 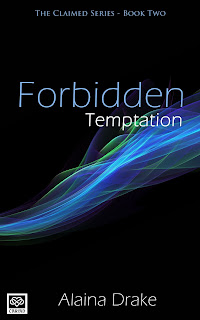 and it's is available from- http://www.amazon.com/Forbidden-Temptation-The-Claimed-Series-ebook/dp/B01ACM5J24 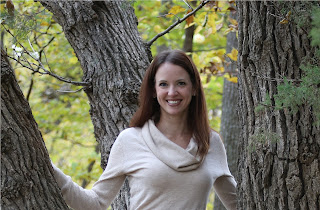 Alaina Drake discovered her love of writing in the fourth grade when she won her first young author writing contest. After attaining a bachelor’s and master’s degree in English Literature, she set out to write novels that combine her two loves: erotic romance and classical literature. She has taught literature and writing at both the high school and college levels, and when she’s not writing, you’ll find her watching sports, baking cookies, and, of course, reading way past midnight. She is an avid rock climber and former ballerina, and she finds a lot of connection between the two activities despite their obvious differences. She lives in with her husband and daughter. She loves to interact with her fans on Twitter, Facebook, and on her website where she blogs about writing, reading, and the everyday joys of motherhood.
***
Many thanks for visiting us today Aliana,
Happy reading everyone,
Kay x