So far I've had two novellas in the City Nights Series published; One Night in Madrid and One Night in Pamplona. I'm currently preparing a third for submission to Tirgearr; One Night in Boston. I don't know if I have a fourth story inside me that fits this series, though the third has been the easiest to write in terms of keeping to the word count!
The idea is wonderful for a writer - two people and a city, and see what happens. Of course, you have to discover who the characters are and why they're open to a new relationship (if that's the angle). Whether it's a novel or novella, that work is the same, and sometimes it's tempting to keep on with them a little two long.
The city has to be the third character. There can be, and usually are, other people in these stories, but the real focus is on the love interests and the city; how the city shapes their encounter and how it makes them feel more or less inclined to get their clothes off.
I chose cities I know well from having lived in each for a number of years. It made that character much easier to draw, like someone you'd written about in a previous novel, or a real person you're taking large chunks of because they're how you imagine the character. Of course, nobody knows any city exactly the same way as others do. It's possible I have my heroes walk right by an important landmark without comment, and a reader who knows the city might think that a mistake; or decry that the heroes never went to his or her favourite spot in the city. But sometimes the character might not know that point of interest, or think it important to point out, even if the author does - just as there are character traits and histories that are not mentioned in the story despite being integral to the character's development.
Such constraints on what you have time to show gives more room for the erotic scenes in the story. These were the hardest parts to write - seems many authors say that! - and the ones I often left till last, giving just a rough outline in the first draft.
I know many writers say you don't have to know everything about a subject to write it, or to have experienced it yourself. It's not like I haven't experienced sex, or have trouble talking about it - as a biology teacher in my other life, I see it as one of the most important parts of my job to provide information about it. It's a little different though. They say we write about death and murder without having killed someone, or even having interviewed an actual murderer. That's true, but it's also true that none of our readers (I hope!) have killed a person either, and so they're not going to call foul if you get something wrong, or if something doesn't seem authentic. I think that's the fear, and part of the challenge in writing erotic scenes. The other challenge is describing with words what is often a wordless act, when one doesn't necessarily think at all. I'd like to believe if I ever was to kill someone, I'd be conscious of my actions (it would help not make all the mistakes murderers always seem to make) and taking note of what was going on. In the bedroom, though, if things go well, we lose ourselves in the act and come out the other side a little bit dazed.
The erotic scenes are integral to these City Nights stories, however. Sex can be the driving force for a lot of our actions, even if there's usually more behind it, and there always is in a story worth telling. Like every real relationship, including marriage, you start out for the sex and you keep going for the other things.
The sex in each story is different, because of the different circumstances each set of characters find themselves in: in Pamplona they're young and have just met, in Boston, they're older and supposedly wiser; in Madrid, they have a history, albeit a very superficial one where they danced around one another without really interacting until their one night in Madrid.
And in each story, after the sex, the characters are left wondering what, if anything, is left. The motive for sex is pretty obvious beforehand, but afterwards, it something we sometimes wonder about - in the starkness of the post coital clarity of mind, when the brain is thinking again; why did we do that? And if there is romance in the erotic romance the answer is usually pretty clearly there - emotions, feelings, friendship, trust, and calmness; a way of being easy with that other person - the comfort that comes with not having to be anyone but the person you want to be, the person you can be without fear of being laughed at. There are different ways to get to that spot, and even if they don't always quite reach there in the space of 25k words, the path is there at least.

JD Martins has been called Spanish, Mexican, Chinese, Philippine and English and Australian. He is none of these.
He's lived in four cities in three countries on two continents, but he doesn't feel like he's travelled very much. His life in each city was rather mundane and he didn't get out much - tending to move his pen more than his body.
He still aspires to see much more of the world - probably when his wife becomes rich enough to let him retire from day jobs.
He would like to live like Ernest Hemmingway: periodically sending novel manuscripts to his publisher from various far-flung corners of the world, though he's not sure the quality will be quite the same. Until then, he has contented himself with living like Robert Graves - in a pleasant part of Spain with a quiet life - and being able to do some things that Hemmingway did - trout fishing in Spain, game hunting in Africa, watching bullfights and running with the bulls, - and a few that he did not get to do - surfing, skydiving, bungee jumping, and getting erotic stories published.
He writes novels for adults and younger readers under the name David J. O'Brien. 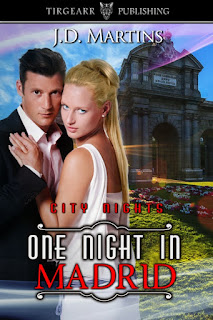 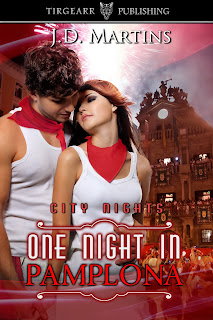 Barnes and Noble: http://www.barnesandnoble.com/w/one-night-in-pamplona-jd-martins/1122151514
Posted by Lucy Felthouse at 09:00