Hello, everyone! Thank you for having me on the Brit Babes blog today.  This is the start of my last week on this blog tour and I’m excited to introduce everyone to one of my secondary characters in my upcoming release.

Five Facts about Eva:
-   She’s inspired by Ella Fitzgerald. Who I admire for her strength, voice, and fashion style.
-   Her character is based off the Sun in the original Fairytale. The Sun is described as hot, terrible, and eats children. Eva is hot and sexy. If she’s terrible, that’s still unknown. As far as eating children… I can’t say that she does.
-    She’s a bit of chaotic neutral, not knowing if she’ll do the right thing or not.
-    Her romantic connections include a brief, unsuccessful interlude with my hero and the leader of The Cursed.
-    Skills include singing, spying, and seduction. A triple threat of ‘s’ words.

Here’s a short excerpt all about my dear Eva:

“Eva, dear.” He took her hand and bowed over it. “He gave me a rendezvous, but tracking this bounty took longer than planned.”

“And Patrick in Nordberg? He would’ve gladly told you where to go.”

Shit. The man she’d knifed without a care. Now the canary would never sing for them. “He was captured and taken in by inspectors. No doubt he’s been interrogated and silenced. They picked him up right as I got to town. Trust me, I don’t want to ask you, but I’ve got no choice. This is the last favor, and the last time I’ll ever put you in danger.”

When had a man other than Bastille ever lied for her? A lump lodged in her throat, dropping to her stomach as the singer let out a shrill laugh.

“Danger? From you? This girl is more dangerous than you ever were. Stupid idea to bring her here. It will take pure luck for you to get out of the embassy alive.”

Then she turned those kohl lined, gray eyes on Sorella and narrowed them. She bunched the ends of her white fur stole between clenched fists, her high cheek bones flushed. Even angry, this woman looked majestic.

“You know the threat she poses. Everyone wants to get a hold of her…if they can. Why not trade? I’ll tell you where Luther is if you give me her. My place in the embassy isn’t secure. They are always worried about spies. I’d be able to prove my worth.” Her smile was purely feral, not fragile at all, but as bent at the core as so many in the world. She was also extremely self-reliant. No wonder Luther admired her.

“I can’t, Eva. Without her, the ship won’t fly. I’d be dead attempting to board without the captain by my side.”

The woman shrugged her shoulders. “Eh, figured as much, but had to give it a try.” 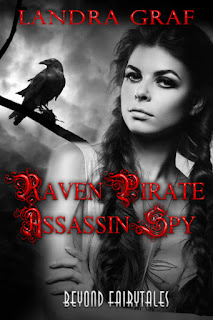 Once Upon A Time…

Sorella Corvino lost her brother to The Cursed years ago. Sorella is so determined to find him, she’ll make any deal, rescue the outcasts and those like him, and risk flying into any port to rescue him. When her latest pirate efforts partner her with a bounty hunter who’s too charming, sexy, and handsome for his own good, she knows she’s in trouble.

Disowned and a marked criminal in the United States, this merchant turned bounty hunter, is one bounty away from freedom; and freedom’s price is handing over one person to the most cutthroat gang in the world, The Cursed. Yet, he can’t get to them without Sorella’s help. Too bad she’s gorgeous, aggravating, and a little trigger happy.

As the attraction mounts, the danger grows and the pair find themselves invading a skin trader den, the ballrooms of dictator-ruled Germany, and fighting battles in the sky in the hopes of getting everything they want. Only thing they didn’t plan on… falling in love.

Landra Graf consumes at least one book a day, and has always been a sucker for stories where true love conquers all. She believes in the power of the written word, and the joy such words can bring. In between spending time with her family and having book adventures, she writes romance with the goal of giving everyone, fictional or not, their own happily ever after.

Make sure to follow the whole tour—the more posts you visit throughout, the more chances you’ll get to enter the giveaway. The tour dates are here: http://www.writermarketing.co.uk/prpromotion/blog-tours/currently-on-tour/landra-graf/
Entry-Form
Posted by Lucy Felthouse at 09:00