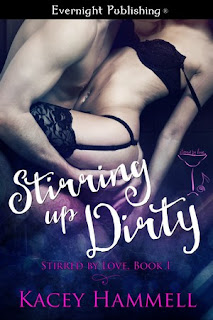 I have lived in Ontario my whole life. It has so many wonderful places to visit – Niagara Falls, which was where my Hubs and I honeymooned. Ottawa, the old Victorian homes, Rideau Canal, The Canadian War/Science & Technology Museums & Parliament Hill are all eye-catching and hold so much history.

For the love of Ontario, as well as various parts of Canada where I have family or have traveled to, I make it a practice now to set all new stories within Canada. I’ll travel to other areas as I revisit other stories set in a series, but my heart is really into home/Canadian places.


Here are my existing titles set within Canada:

Hands All Over – Moncton, New Brunswick


And I am working on a story now that is set on Trinity Bay, Newfoundland. So I’m making my way around Canada…one book at a time.

Which brings me to my latest release, Stirring Up Dirty, which is set in St. Albert, Alberta. My Aunt and Uncle have vacationed there many times and I’ve seen a lot of photos of the glorious mountains, downtown shops and the peace and solitude there.

I find it comforting to write stories set in areas of Canada, which I love dearly. Each story becomes even more special to me.

Blurb:
Shaken and Stirred with a splash of dirty.

Candy Wilson arrives in St. Albert with one mission—to sign the next young, hot model to her modeling agency. She has no time for distractions and isn’t prepared for bartender Eric McKenna—the brother of her young client-to-be, Melissa. Eric challenges her on all counts, irritates her daily, and heats her body to boiling temperatures with just one touch. He’s hard to ignore and impossible to resist.
Eric McKenna will be damned if his baby sister signs any contracts with Candy Wilson. No way in hell will he allow anyone to whisk Melissa off to a foreign country and lead her on a path that’s not right for her. And yet Candy pushes him further than he’s ever been before and drives him crazy. Eric can’t control his need for her or the desire to engage with her … on so many levels.

“I really loved this fast paced story. The banter between Eric and Candy is thrilling and their sensual innuendos are sizzling. With this stunningly delicious story, we also get an update on a long beloved couple.” ~ 5 Stars, Liz, Goodreads

“…an amazing book from beginning to end…another great book by an amazing author. ~ 5 Stars, Stephanie, Goodreads

Excerpt © Kacey Hammell, 2015
Eric’s breath rushed from his lungs as Candy propelled off the sofa and straddled him in one svelte move.
He couldn’t resist the need coursing through him. Seeing her in his home today, a light blue sundress flowing seductively over her body whenever she’d moved, he was helpless to fight it.
Sliding his palms over her back, he groaned when her moist center came in contact with his hard-on. He ached. His buddy wanted escape from his pants. Needed to find the sweet heat that would make him happiest.
Her mouth latched on to his as she quickly undid his pants and lowered the zipper, freeing him. She nibbled his bottom lip with her teeth, then sucked it between her lips before her tongue plundered.
He’d never known anyone like her. Cool and collected one moment, and hotter than a crisp day in August the next. Their tongues played, tasting one another. He drifted his hands over her back, drawing her in closer, his dick rigid against her center heat.
Coming up for air, she shoved her fingers through his hair and grinned at him. Her eyes shone bright with desire and exhilaration. Her cheeks red, her breathing deep, she already had that sexy messed up look like she’d been ridden hard and completely satisfied.
And he’d make sure she left here today feeling both.
Clasping her hips, he shoved her down harder on his lap, her already wet cunt gliding along his shaft.  Her heat nearly scalding him, he laid his head back against the couch, watching her as she closed her eyes and gave herself over to pleasure.
Their heavy breathing filled the living room as he rolled her hips back and forth. Christ, she was spectacular. Her long hair swiped over her shoulder, mouth agape, cheeks flushed… She was primed and ready. All he’d need to do was shift her panties to the side and sink deep inside. He groaned.
Her eyelids lifted, the desire in her gaze nearly stealing his breath.
“You feel so good against me, babe,” he mumbled, prompting her hips to move faster.
She held on to his shoulders, her fingers digging in. “Eric,” she moaned, breathless.
His heart rate picked up, and he absorbed the joy of his name on her lips. He wanted to hear more of that. Every day. As much as possible.
What the hell are you thinking? There was no turning back. Not right now. Not when she was sliding against him, her pussy hot, and driving him to near insanity. How he was to keep a coherent thought in his head, he had no idea.
But one zipped through his mind, nearly stopping his heart.

And to top off the new release!...Get DARE (where readers first met Candy!) for only $0.99 ~ At Evernight Publishing, Amazon stores, All Romance Ebooks 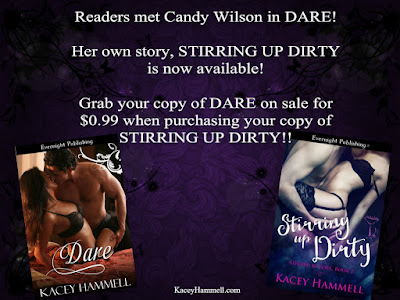 Mom of three, Kacey lives her own happily ever after with her perfect hero in Ontario, Canada.