A Sense of Place by Izzy French (@izzyfrenchbooks) #erotica #romance 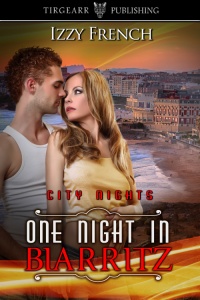 Character. That’s what always comes to me first when I’m planning a short story, a novel or a novella. For me it’s generally about the people. Plot - that’s always a bit, well, meh. It’s got to be done, obviously, but I feel plot will emerge as the characters meet, interact, fall in love, make love and misunderstand one another, until the story reaches a climax. Happy ever after, happy for now, or otherwise. Plot is an organic process. And when I say ‘planning’, what I really mean is the five minutes I spend in idle contemplation in front of my trusty old laptop and before I start writing. Maybe that’s why plot is so hard to come by, because planning is so scanty.

Since writing my first novella in the City Nights series for Tirgearr, another factor that has bobbed to the top for consideration is A Sense of Place. I’ve tended to wimp out when considering settings with short stories. A country house hotel for some saucy shenanigans, a Victorian woman’s atelier, an artist’s studio. Not real places, as such. But a basic requirement of this novella was that it needed to be set in a real, live city. So, what do you do? Choose somewhere many miles away, exotic even, somewhere you have never visited but have firmly on your bucket list (Havana), or plump for somewhere more familiar? Somewhere you have a sense of history with too. I went for the latter. I thought it would work well for an erotic romance; a place with some ties, a place which I think of fondly. And a place I find sexy.

My first choice, Biarritz, was wonderfully familiar. I love the place. That feeling of faded Art Deco glory, the gorgeous beach and rolling waves. It’s still so very French – elderly, elegant French ladies head to toe in Dior, with highly groomed poodles, sipping espressos at the Miremont. That kind of thing. And as I began writing I found that this time I didn’t start so much with character (although I had a very vague sketch of the main characters in mind). This time the characters emerged from the setting. And I enjoyed writing that way, for a change. My heroine, a British woman working in France, loved the city, had a French ex, knew all the hot spots and saucy places. My hero, a quintessentially British man, and a photographer, was on the run from a failed relationship, and ready to explore both a new city, and a new woman.

I’ll take the fifth and leave that to your imagination.

Author of One Night in Biarritz, (City Nights Series, no 11), Tirgearr Publishing available from:

Her short fiction has appeared in Scarlet, Take a Break, Woman’s Weekly, The Weekly News, Woman, That’s Life (Australia) and You Magazine (South Africa). N  She has also had stories published in two charity short story collections ‘Sexy Shorts for the Beach’ and ‘Diamonds and Pearls’ both published by Accent Press.  She has won and been runner up in a number of writing competitions.