Special Guest: Sometimes I wish I were a Brit by Lisabet Sarai

I’m still on a high from my trip to England in May, to attend Smut by the Sea. Because I live in a conservative Asian country and have to scrupulously guard my anonymity, it’s very rare for me to get the chance to hobnob with my fellow erotic authors, let alone to read my work in public. I was thrilled to finally meet face to face with friends whom I’ve known online for years, including Madame Blisse and her loyal swain Kevin. Some of the attendees had actually read my books, and told me they liked them! Talk about an ego boost! 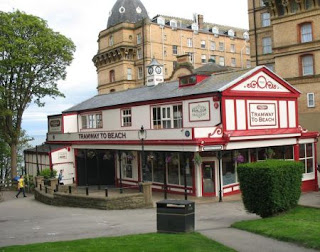 Even without the event though, I would have enjoyed Scarborough. I adore seaside resorts, in any country, and I have a special emotional attachment to the Victorian period—perhaps due to all the Sherlock Holmes I read in my youth, and the many pages of Victorian erotica I consumed later. I’ve even entertained the theory that I had a previous life during Victoria’s reign. In any case, I found Scarborough intensely atmospheric. Though it was quite deserted in off-season, my imagination peopled it with men in frock coats and ladies with flowing skirts, corseted waists and tiny veiled hats perched upon their upswept ringlets. I could picture them strolling through the gardens, taking tea on the verandas of the grand hotels, or waiting in line, beneath their parasols, for the tram to the beach. 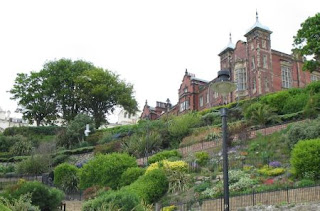 Indeed, sometimes I wish I was a Brit. Raised on tales of King Arthur and Shakespeare’s plays, I’m hungry for history. England delivers. Before traveling to Scarborough, I spent a couple nights in fabulous York. We stayed in an inn where Guy Fawkes was born, in 1570—but that’s relatively recent for York, which was founded as a Roman garrison in 71 AD then became the capital of a  Norse kingdom in the 9th century.

The castle on the heights above Scarborough Beach dates from the twelfth century, and there are even older fortresses up and down the coast. Contrast that with America, with a mere two hundred fifty years under its belt, aside from a few spots like New Orleans, St. Augustine and the Spanish mission towns in California. 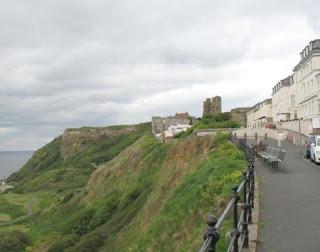 The typical British countryside may be less grand than the vast and dramatic mountains, deserts and canyons of my home country, but it’s the greenest place I’ve ever been. (I’ve never seen Ireland.) I recall a trip to Bath, many years ago, in the heart of January. The temperature was about zero Celsius, with frigid winds. Yet the fields and meadows were all an astonishing emerald hue. I’m sorry I didn’t get the opportunity on this trip to visit the famed Yorkshire moors. That will have to wait until my next visit. 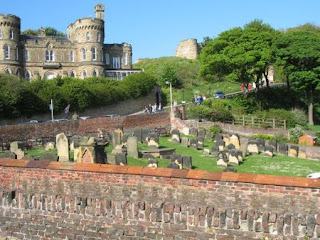 As an author of erotic fiction, I really appreciate the Brits’ attitude toward sex. To an outsider, at least, it seems far more relaxed and healthy than the Puritanical stance typical of America. In the U.S., many cities would never allow the organizing and especially, the public advertising,  of an event like Smut by the Sea. My DH and I were amazed to see Smut by the Sea posters out on the street in front of the public library where the event took place. There wasn’t anything particularly  risqué about the plump, bikini-clad lady frolicking in the waves, but the mere word “smut” would raise American hackles.

Indeed, the vocabulary Brits use to talk about sex captures a sense of joy and fun rather than shame. If I were a Brit, I could write use words like “snog”, “knickers”, “bonk” and “shag” and not feel like I’m speaking a foreign language. I especially love “shag”, which is so much less aggressive than “fuck” or “screw”, without descending into the sentimentalism of “making love” (though that’s sometimes appropriate too). “Shagging” implies a level of mutuality, a sense that a good time is being had by all.

My first publisher and my current main publisher are both British. So you’d think I’d have written characters from England, or set some of my books there. For the most part, I haven’t dared. I’m really not sure I can capture the cadence of British speech. And my visits to the country have been all too few and far between.

I do have one heroine who’s a Brit, though—Ruby Maxwell Chen from my novel Nasty Business. Ruby is half English, half Malaysian Chinese. Although she looks (and sometimes thinks) like an Asian, she was brought up and educated in England, and now runs the Maxwell Group of companies from a luxurious office building on Canary Wharf. The first third of the book takes place in London, before the action moves to Los Angeles, where the hero Rick Martell is based. However, I cheated a bit (or maybe chickened out would be more accurate) and didn’t really push too hard on the local details. I do have one scene, though, set in a London taxi, which probably wouldn’t work in most other cities—there wouldn’t be room in the back seat!

I’ve included a (very explicit) excerpt from this scene below. If you like it, leave a comment on this post with your email, and I’ll enter you into a drawing to win a copy of the book!

I want to thank the Brit Babes for hosting me and Victoria as well as for being the guiding light behind all the luscious smut events in the UK. And I hope I can come back to England, before too long, and meet more of my British friends in person. 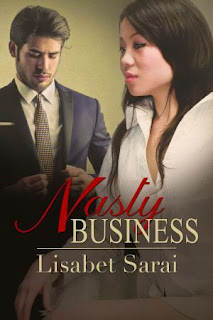 We make our way through the crowd to the street. I find that I am sensitized.  I notice the rubbings, the gropings, the manifold exposures, in the churning throng. My companion does not touch me, but I feel his presence as he follows my leather-clad form. Like burning coals. Like the unstated fact of a whip draped over a chair.

We are in a taxi now, in the semi-private darkness, and his hands are all over me. I don't worry about the driver. What is there that a London cabbie has not seen? I teeter between enjoyment and terror. Oh, I want this stranger, but surely, it must be on my terms.

He brings my hand down between his thighs, and I feel triumph. Finally, he is erect, he wants me. He unzips his trousers and releases his cock. "I'd like you to suck me," he says. There is a trace of irony in his voice. "Assuming that you are feeling generous, of course."

He is watching me as the passing lights first illumine me, then throw me into shadow. He feels my hesitation. "Go on," he says. "You know you want to."

Recklessness and desire. He is right. This is only a one-night stand. I should follow my heart, body, whatever. I straddle him as he lies back on the bench seat, arrogantly thrusting my arse in his face. No kneeling before my master, not for me. His penis bobs in front of me, inviting, almost taunting.

I decide to taunt him in return. I begin with the lightest of touches, just a tease; the tip of my tongue on the sensitive knob. I am rewarded by a faint moan. His swollen member twitches, nearly hitting me in the face. Carefully, I trace the ridge below the bulb, delighting in the smoothness, and the tension underneath.

His cock strains toward me, seeming to beg for the warm depths of my mouth. But I continue to tease, licking, nipping, tracing the veined length of him with my tongue, but not letting him into me.

I feel his fingers between my legs, and realize that he has decided to tease me in retaliation. So be it. I am grateful for any touch there. The more I sample his cock with my tongue, the more I want to feel that swollen bulk deep in my sex. It is not the longest, nor the thickest, nor the hardest cock I have ever encountered. But like its owner, it glows with some kind of sexual energy. I can feel the vibrations when I bring my lips close to kiss the tip. Still, though, I resist the urge to engulf him, to feast on him until he cannot bear the pleasure. That is what he wants, I know, and for that, he will just have to wait.

"Come on, Ruby," he says, his voice husky, persuasive. "Don't be shy. I know you've sucked cock before. Open up!"

It does not register; the fact that he knows my name. Hardly surprising, because at that moment I am impaled. Until now, the most delicate, fleeting caresses, making my body scream for more. Now, suddenly, there is something hard and smooth in my cunt, sliding in and out of my slippery cleft and bringing a scream to my lips, despite my determination to remain in control.

He takes advantage of my gaping mouth. As I gasp for breath, struggling to comprehend and control my reactions, his rigid penis slips between my lips. Silk over granite. Hot blood pulsing. A tremor takes me as he thrusts simultaneously, deep in my throat, deep in my sex. I am skewered on these two points of pleasure.

I have more degrees than anyone would ever need, from prestigious educational institutions who would no doubt be deeply embarrassed by my chosen genre. Aside from writing, travel is one of my most fervent passions. I’ve visited every continent except Australia, though I still have a long bucket list of places I haven’t been. Currently I live in Southeast Asia with my indulgent husband and two exceptional felines, where I pursue an alternative career that is completely unrelated to my creative writing.

I’m also on Goodreads, Amazon, and so on. Just Google me (or check the links above). For better or worse, there’s only one Lisabet Sarai!

Don’t forget to comment so you’ll be entered in my drawing!

Posted by Victoria Blisse at 08:11