I'm very pleased to share with you a post that I wrote five days ago while sitting in Bryant Park behind the NYC Public Library feeling the great book vibes. Enjoy! 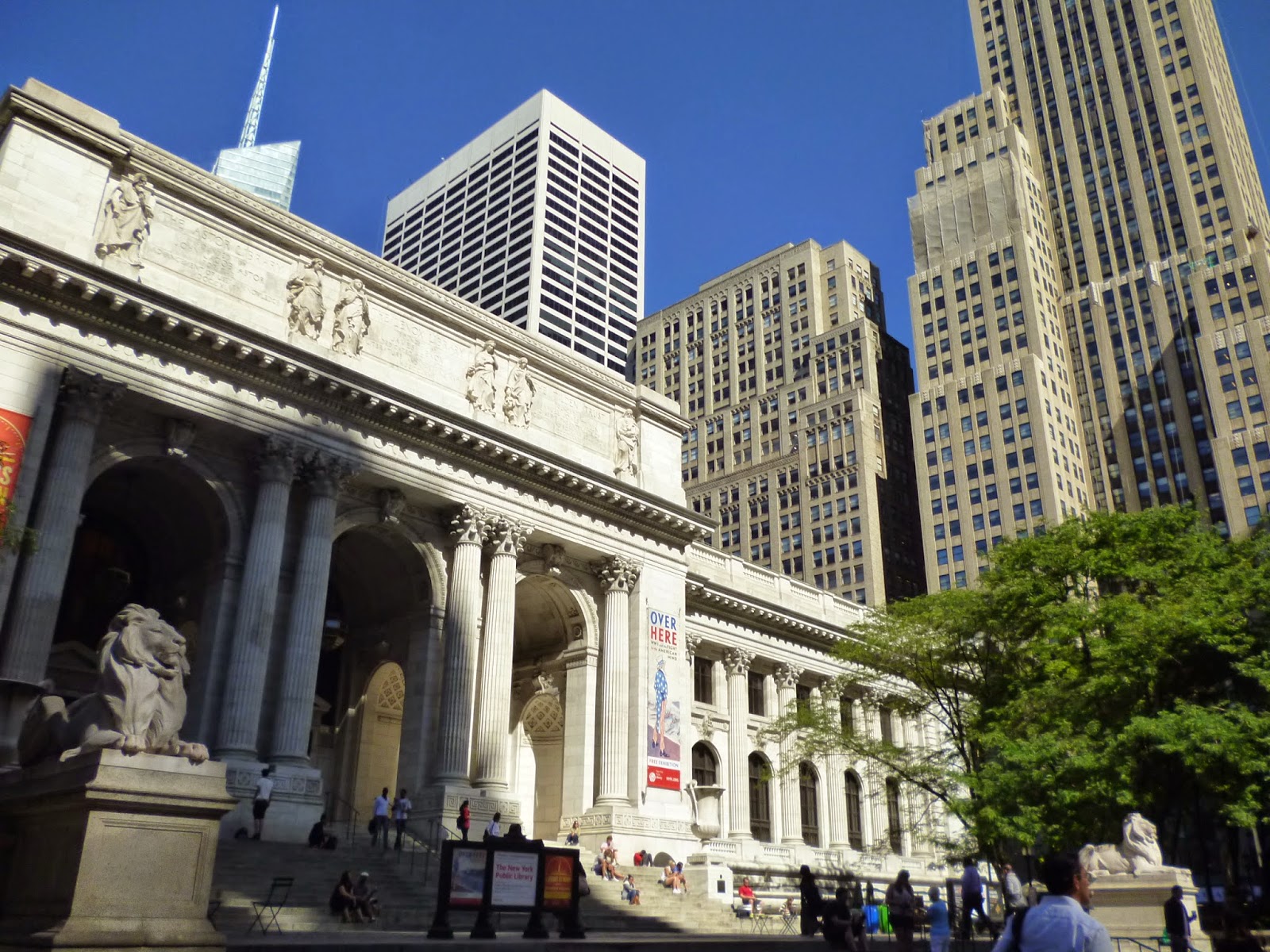 flanking the front entrance, the one that played a starring role in the film The Day After Tomorrow? The one that’s … well, THE iconic library. Yup! That one! Today I’m just hanging out in the library and the park, which, BTW, is dedicated to William Cullen Bryant. I’m taking in the ambience, feeling the love of books. The place was a pauper’s field at one time, and then it became a public park, which became neglected and overgrown. Then the Croton Reservoir was built there. It occupied a two block area of Fifth Avenue and held drinking water for NYC, which was piped in from the surrounding countryside. It looked like a gigantic topless pyramid filled with water. Its walls were wide enough at the top to provide avenues for people to walk around and enjoy the views. The reservoir was torn down and the present library was completed in 1911 and, at least to me, it really does have the feel of a temple of learning, a sacred space for writers and readers.

But this is not a tour, and I’m not here today touring. On this overcast, warm afternoon, I’m here to write in the 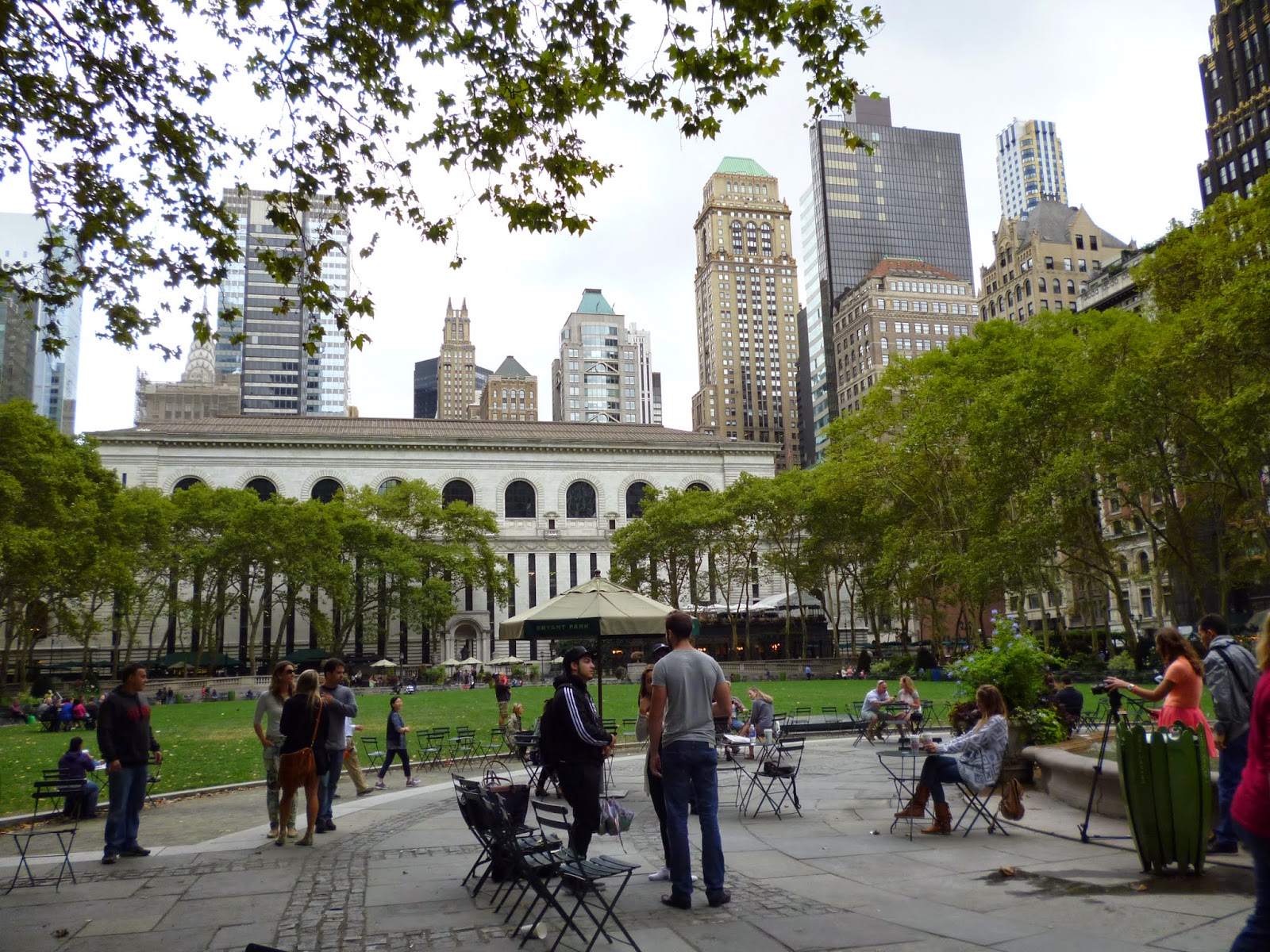 That got me thinking about the connections libraries and train stations have to a writer’s soul. There’s something archetypal about journeys, whether they're the physical journeys we make on a train or the mental journeys we make when we open a book and pass into the mind of the storyteller or the philosopher or the scientist.

The Initiation of Ms Holly was conceived on a train journey between Paris and London, and the characters in many of my books return over and over again to libraries of one sort or another – most of the libraries in my stories are renditions of my dream library from the House Beautiful in my imagination. Every writer and every reader has an image of their fantasy library in their head. It's the reader's/writer's wet dream. Books and the ideas they represent are so often the jumping-off place for other books and other ideas. They can take us farther than any train at any station, but the journey and the representation of the journey and the way we remember the journey after the fact are so much more life-changing than the destination. 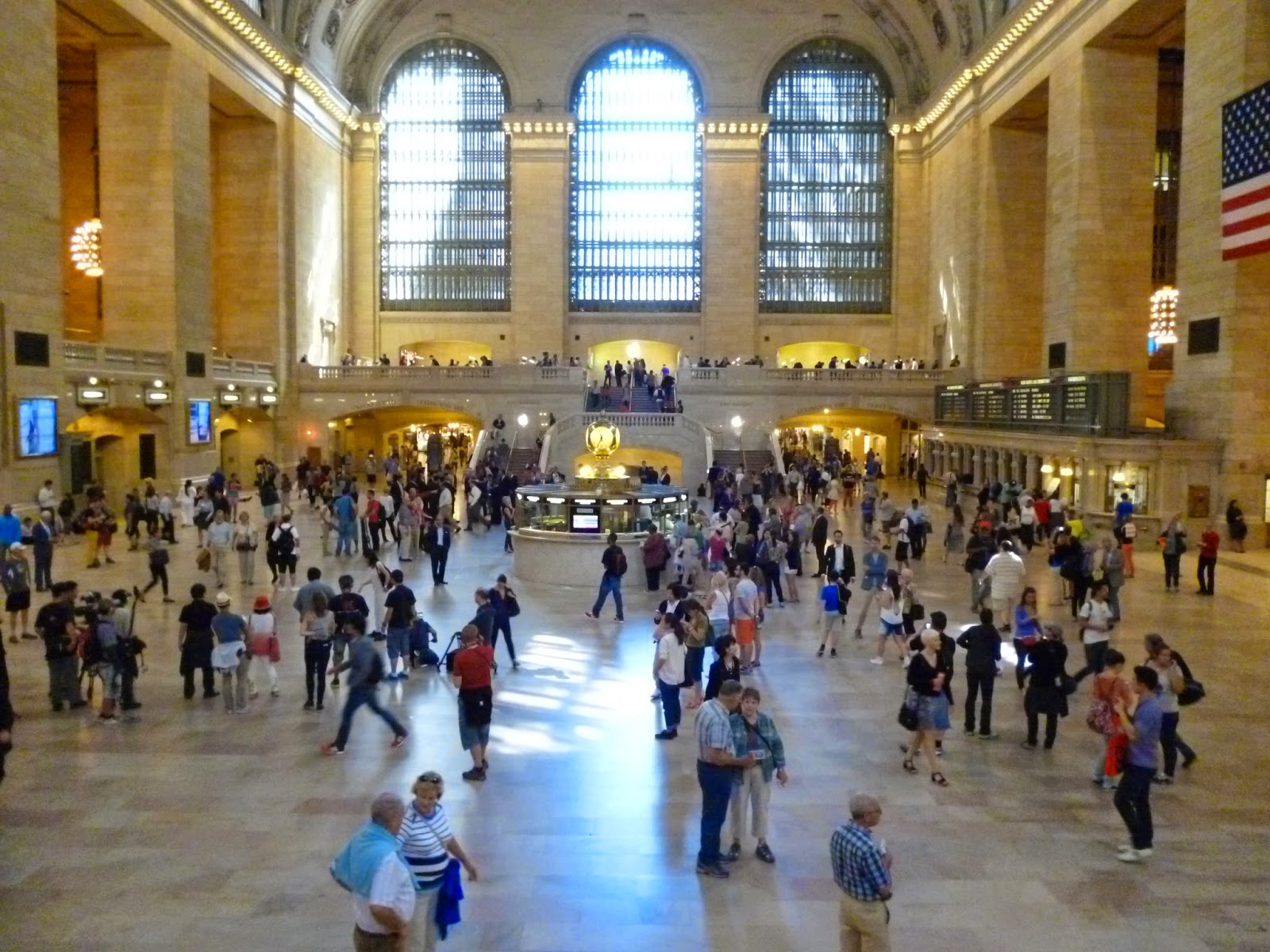 The fact that a library stores so many ideas, so many imagined journeys, so many journeys reflected upon, so much information gleaned from so many minds makes the place mystical in ways that are at least as powerful as the oldest places of worship. The library is the repository for the human mind and the culture it has birthed, all the wisdom, all the knowledge, all the fanciful journeys humans have taken are housed within those sacred walls. The very evolution of human culture is housed within those walls. That thought gives me goose bumps!

The fact that a train station holds endless possibilities for endless journeys makes it a place where those stories that end up in the libraries could very well be born. A half a million people pass through Grand Central Station every day, and each one of them has a story, each one of them has hopes and dreams, and each one of them is inspiration for the writer. There’s something about the whole world being connected by parallel iron rails that gets me thinking about … well … connections and clandestine meetings and intrigue. With trains there’s a sense of a journey unfolding that, for me, is missing in other modes of transportation. A missed connection means either a long wait with time for unexpected events thrown in for good measure or even more exciting, a rerouting of the journey. In our dating days, my husband and I ended up in very rural Serbia by missing 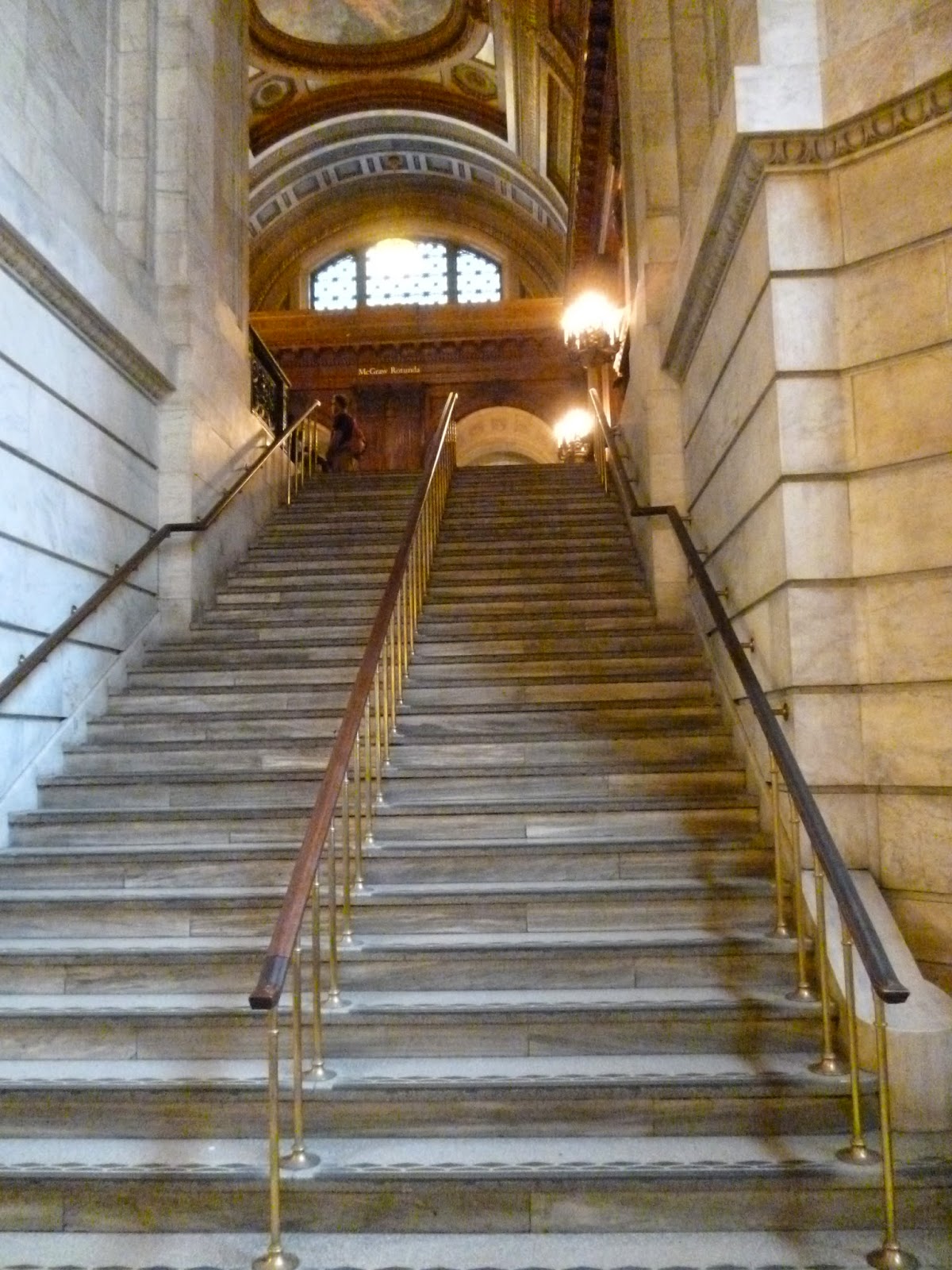 our stop to Belgrade. The only connection back was a night train from Turkey in the wee hours. We count it as one of our ‘dating’ adventures, a part of the KD and Ray Cannon of life as a couple. And yes, the experience has worked its way into stories.

So why am I rambling? Well because the journey of a book and the journey of a train inspire me. I read almost as incessantly as I write. I need both. And some of the most amazing adventures of my life – as a writer and as a person – have had their beginnings on trains. The Initiation of Ms Holly came from being stuck in the Eurostar Tunnel on a malfunctioning train, literally under the English Chanel; I knew that I loved my future husband after our unexpected over-night journey to Lapovo, Serbia, because he handled our missed connection as an adventure to be shared and laughed about rather than a disaster to be moaned and groused about.  I’ve travelled on the Shinkansen to Hiroshima to the Peace Memorial Museum; I’ve taken the Red Arrow overnight from Moscow to St. Petersburg. I’ve taken more trains to London than I can even count. This week I’ve ridden the Long Island Railroad into Penn Station to explore NYC for the first time ever. And is it really a surprise that this day I end up on a pilgrimage at the New York City Public Library?  I am alone today. Raymond is at a martial arts workshop. I am lost in my head in a park dedicated to William Cullen Bryant surrounded by sky scrapers that give me a stiff neck to view, watching the people around me read and write and play chess and juggle and connect with friends in the shadow of one of the most iconic buildings in NYC. Perhaps some of them came into the city through Grand Central Station. I’m sure many of them, just like me, see this place as one of the most sacred sites in the city, one of the most treasured symbols of humanity at its very best. 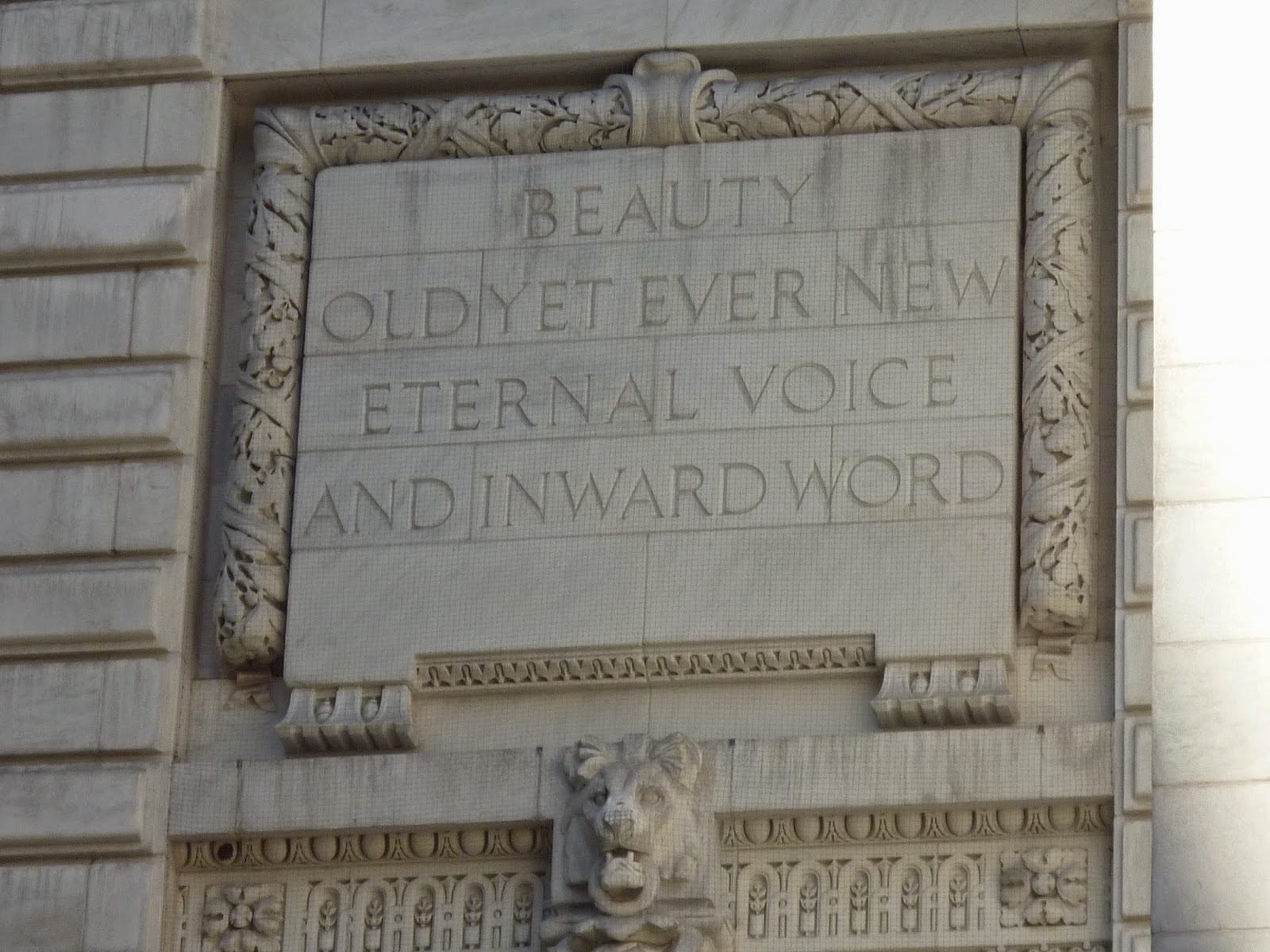 As the rain begins, I quickly relocate myself in the library, climbing the marble stairs to the breath-taking and neck stiffening McGraw Rotunda, where I stare at the murals celebrating the coming of print until my eyes hurt. I am surrounded by marble and warm wood panelling and the rain pouring down on New York streets outside. People come and go -- tourists, students, and fellow pilgrims, and I watch and savour the experience from a marble bench beneath the mural of Prometheus bringing fire. Then  I remember that I have this post to finish, this experience to share. The written word … it’s always about a journey. The stories we tell lead us from destination to destination over and over again, and yet it’s the journey we remember – the art of getting there, and the gift of sharing that journey with others long after it's happened and long after its idea is born in our mind – that’s the sacred task of a writer. I am humbled, and I am honoured to be on such a journey with such a task to perform.
Posted by K D Grace at 07:30