Please welcome Elizabeth Lapthorne who has come all the way from down under to visit our blog today. Elizabeth writes for some of the same publishers as the Brit Babes and last year had a trip over to the UK to visit and sightsee. Here's the gossip about her trip… 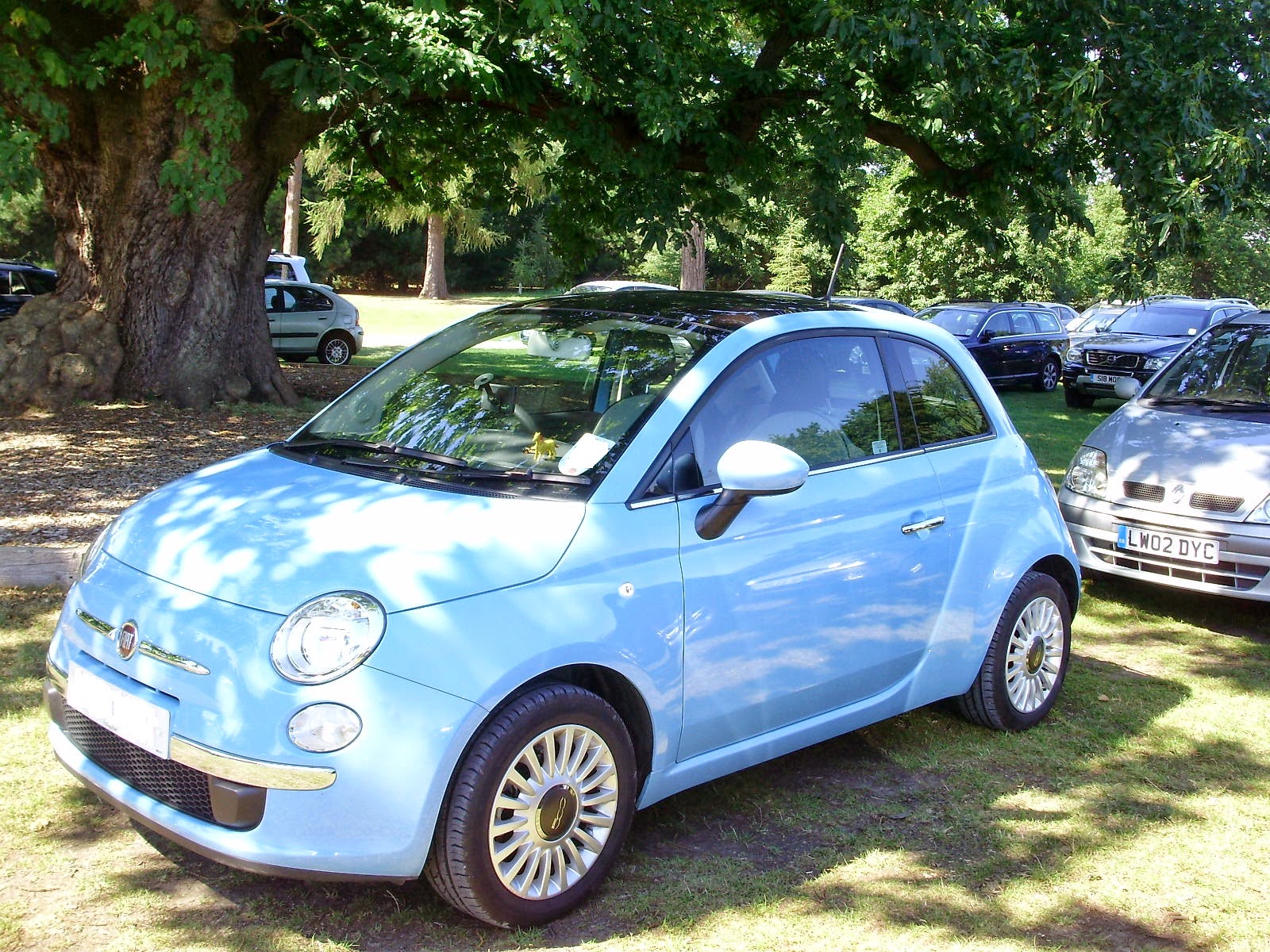 It’s not very unusual for an Aussie gal to be travelling around the United Kingdom on a budget, cramming as much tourist stuff into her itinerary as possible. Indeed, it’s practically a cliché. But for me, it was literally a trip I’d been planning wistfully for about 7 years and *very seriously* for a further 2. So at the end of summer last year when I finally boarded that horrendous 30 or so hour Qantas flight, I was thrilled. I’d said eager farewells to my family and friends. I’d also somehow managed to lug my packed-to-breaking-point rucksack into the check in area of the airport. When asked why I was attempting to carry a bag 7 kg over the weight limit on my back, the only answer I had was an enormous smile and over-excited ramblings of all the places I intended to see and all the things I might need.

No one, least of all my mother, was surprised when after about four days I started to send unneeded items boxed up to her (rather expensively I might add!) via Royal Mail. Mum states that to this day she’s never received so many parcels and boxes in any six week timeframe of her life. Plus, I’m not joking when I state that UK google maps and the phrase “nearby post office” became one of the most regular searches I made (after “nearby parking lot”). And in one place when I discovered I’d completely obliviously booked myself into a that was easy walking distance from a 24 hour post office, I almost thought I’d died and gone to heaven. But I digress, that (and the 159 postcards I sent my four nephews) are a whole other story in itself.

So I spent a week doing most of the usual tourist-trap stuff in London. The Tower, Westminster Abbey, Parliament, Kensington Gardens, 221B Baker St etc etc. I will own up to a ghoulish thrill at finally setting eyes on and touching the National Gallery with my own hands. I had my villains in Unearthed Treasure decimate the front of the Gallery with a rocket launcher – try getting *that* out of your head when spending a day wandering those hallowed halls and ogling the impressive artwork! 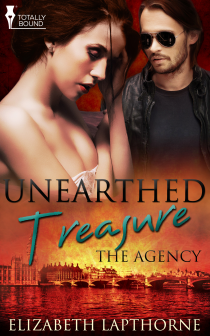 But after a week of finally seeing everything I could squeeze into London – I set out on what I was really excited about, a five week odyssey driving around the United Kingdom and Ireland.

So as to not bore everyone silly, I’ve decided to pick four big lessons that I learned during my six week stint.

While I admit that I called this gorgeous thing My Little Blue Powder Puff, don’t underestimate it by its tiny size and unassuming looks. This little tinker toy survived some seriously hard yards. In about five weeks I did very nearly 6,000 kms in it (no small feat in and of itself), but the car also surprised me by how it just kept going and going.

The biggest single day I did was driving from Oban, Scotland all the way down to Manchester, England – a serious hike there! And a lot of it was done in vastly annoying rain. While yes, rain is to be expected in the UK, driving at 80 mph on the motorway with the windscreen wipers on full tilt and dodging between many large trucks is not a piece of cake. Trust me. So yes, never again will I underestimate an itty bitty car!

Lesson #2: Said small car can also take quite a bit of abuse. 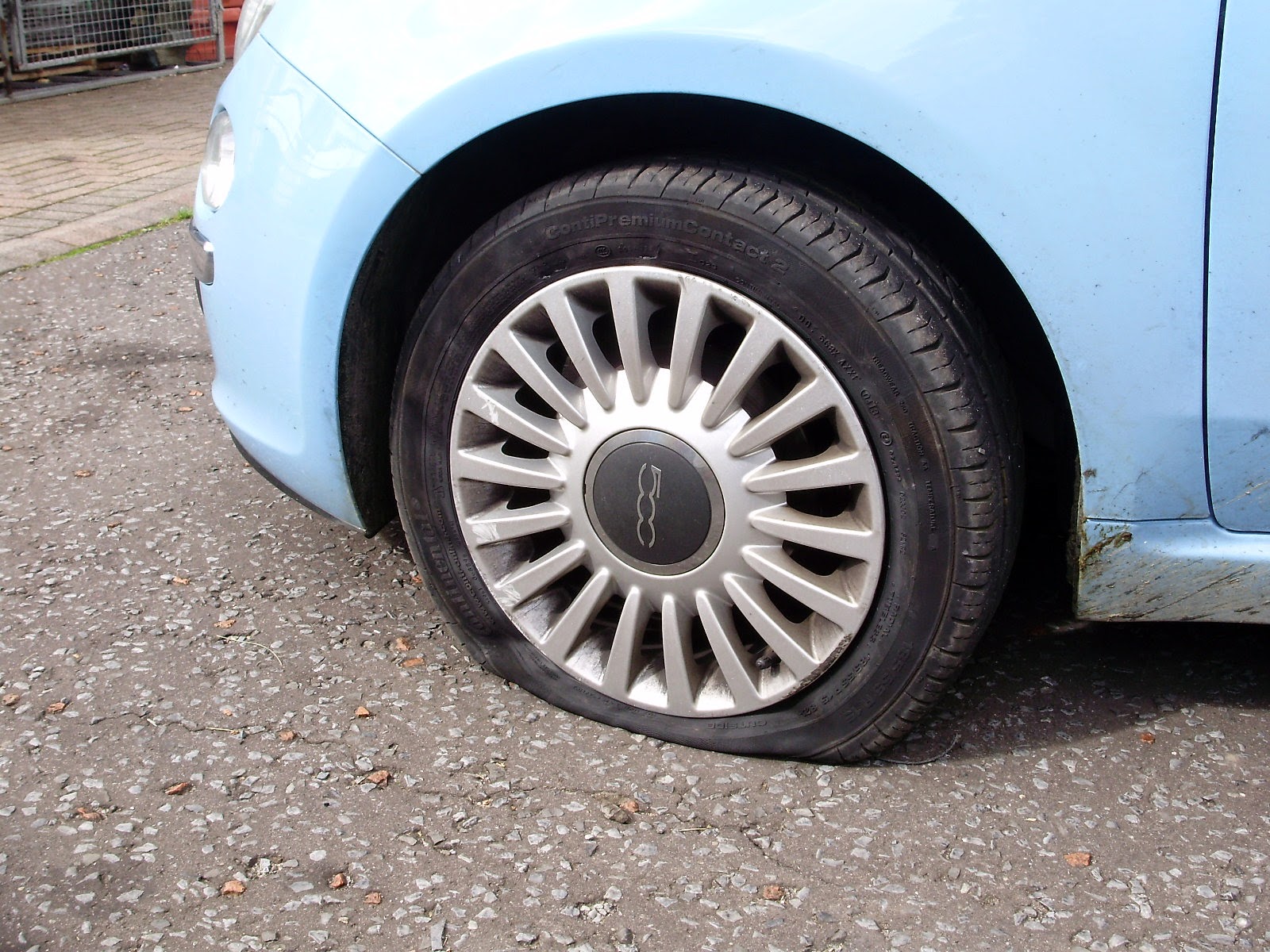 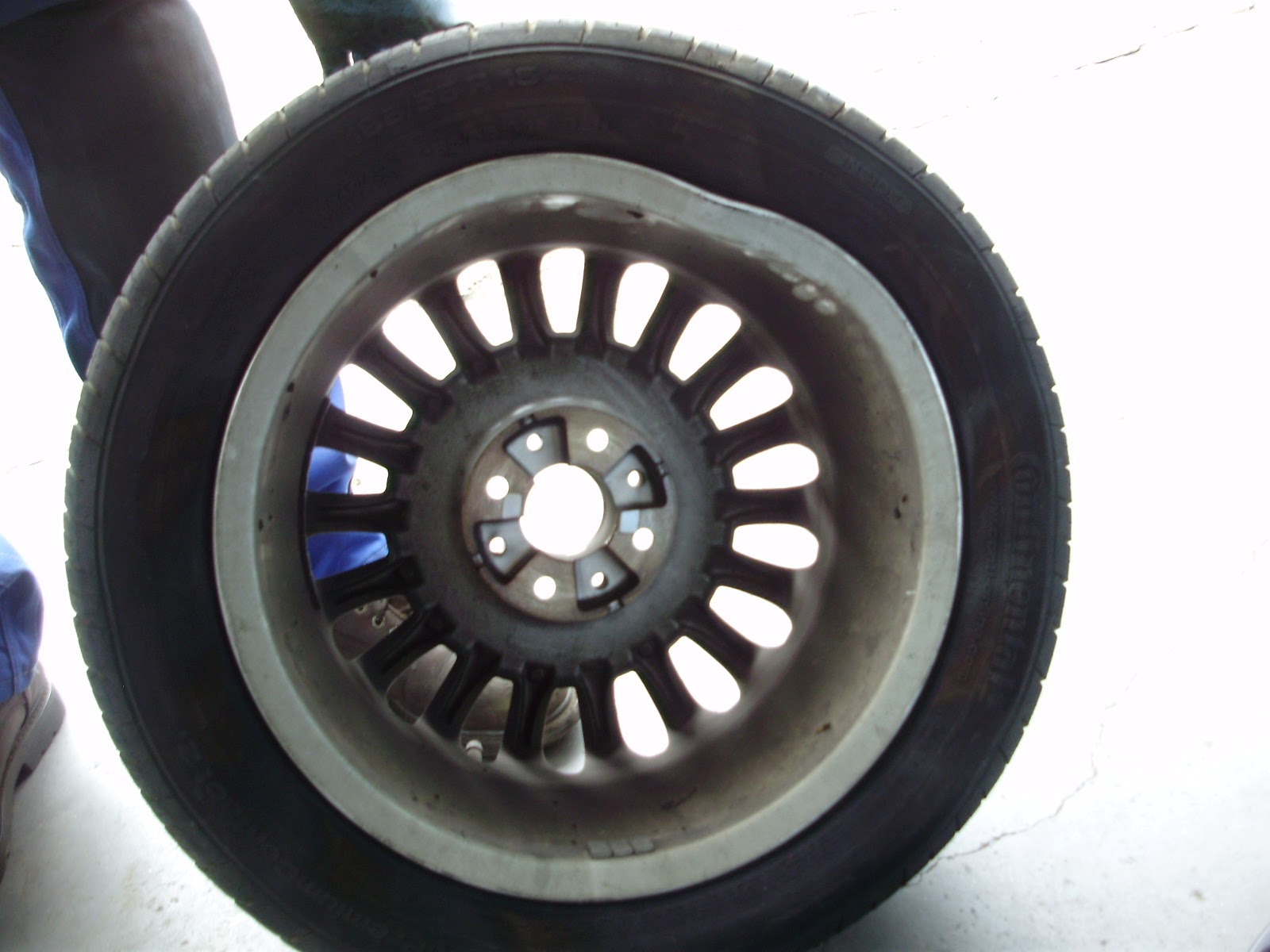 One of my “not so fun in reality but now makes a great story” days was down in Enniskillen, Ireland. A friend and I were driving around, minding our own business, when I noticed there was a large rock or piece of wood on the road. My friend and I had been talking so it was rather late when I noticed this and I swerved to avoid hitting it.

Sadly for my Little Blue Car, I didn’t swerve fast enough, and this is the resultant mess. Needless to say most of the next day was spent alternately batting my eyelashes at the local mechanics to get my tyre fixed (those boys were awesome and I’m deeply indebted to them!) and struggling to not have a panic attack at the thought of the cost and what my insurance carrier would say. But the boys came through for us and we were on our way the following day.

On to far happier lessons.

Lesson #3: Scotland has a lot more going for it than sexy men.
So I spent about a week in Scotland, hoping (expecting) to see a whole lot of this: 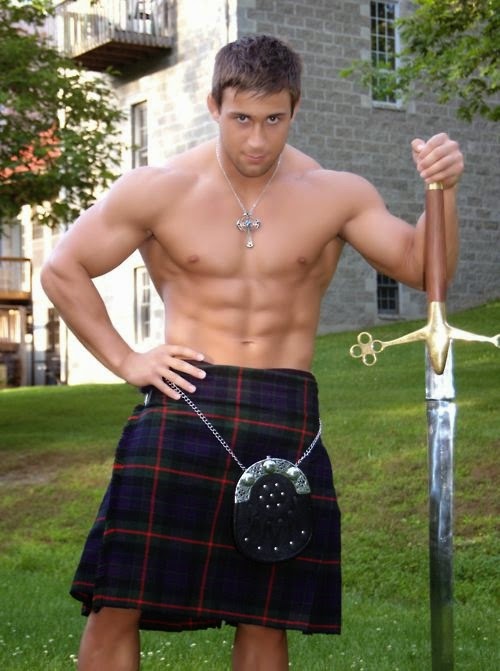 And what I got instead was this: 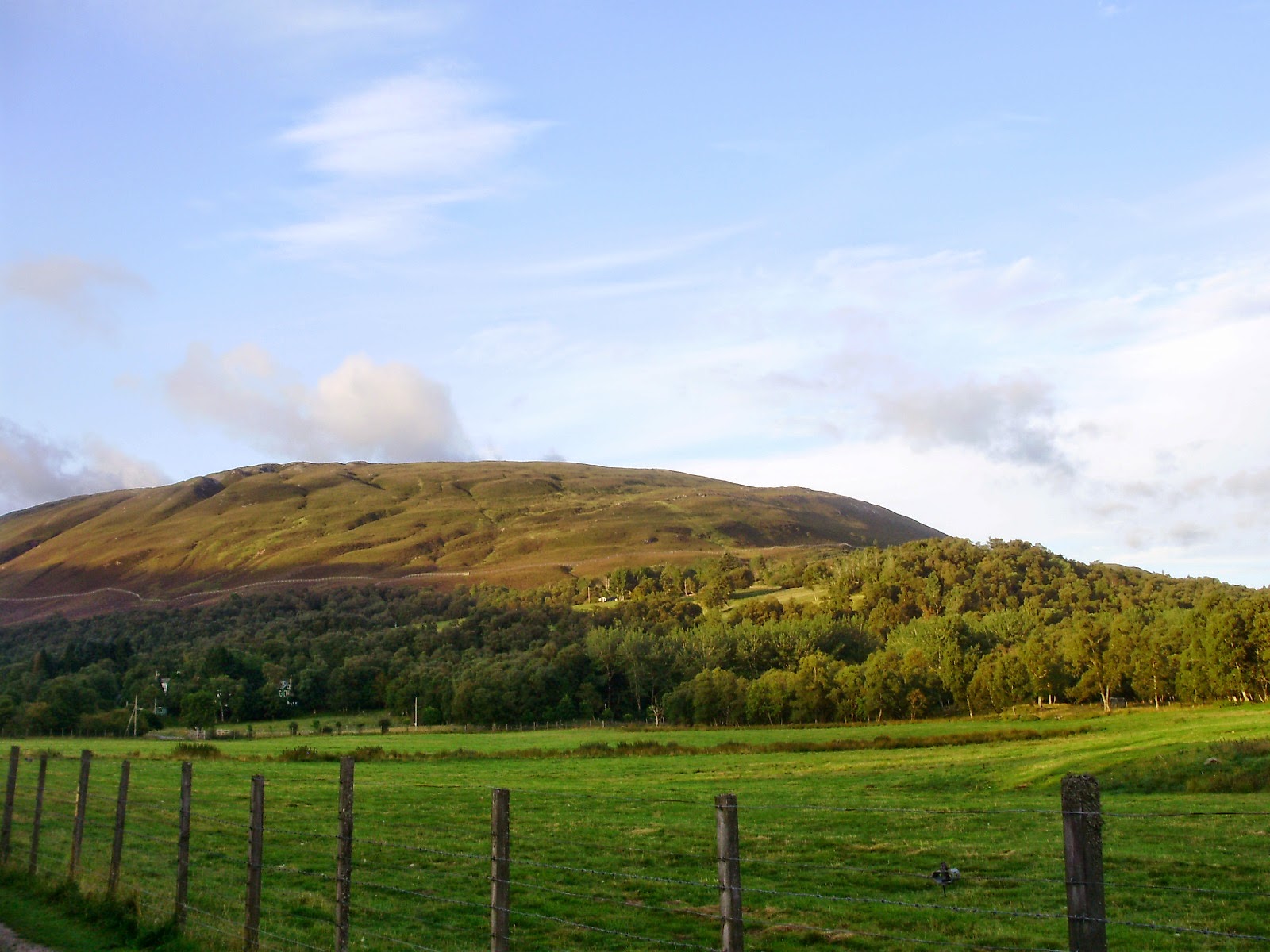 Needless to say, while I certainly wouldn’t have turned down a lovely romp with a drop dead sexy kilted man, I went away from Scotland with a whole new perspective on the country. I’ve read the books, heard the songs and yes, intellectually know it’s a gorgeous place. But seeing it for myself, driving through the Cairngorms (a special highlight that still stands out in my mind) and just getting to breathe it all in really touched me. The beauty of the land out there is just amazing, and no amount of Scottish, historical romances could ever come close to describing the pictures now in my head.

Let me say up front, I’m not a stupid lady. I’m no braniac, but neither am I particularly foolish. And  I wasn’t expecting Ireland to be endless seas of green and more Guinness than a girl could poke a stick at. I’d be lying if I said there wasn’t plenty of both - but it there were a few hidden gems I uncovered, and the Giant’s Causeway really sticks out in my mind. 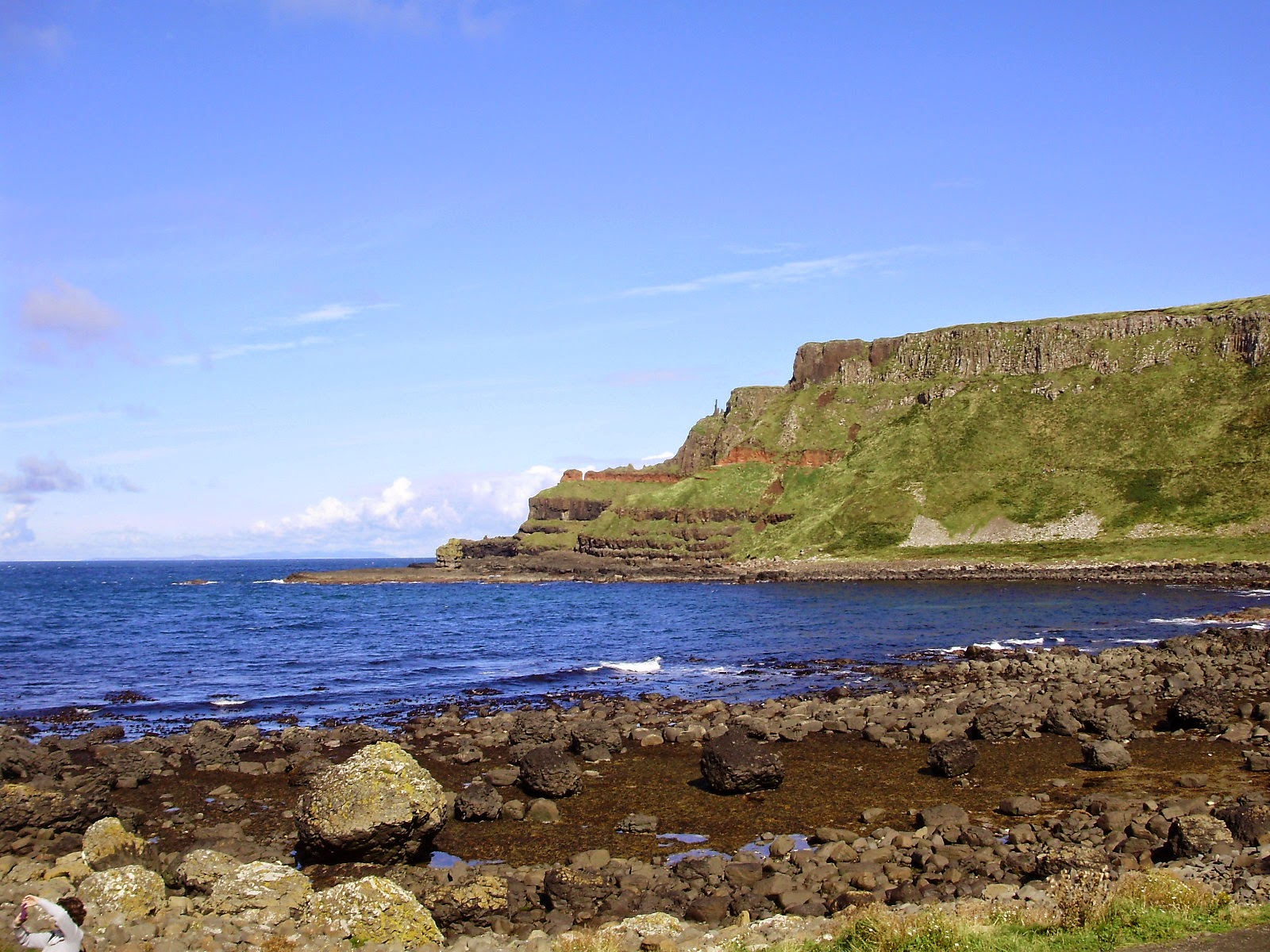 Being honest, I think part of the reason was we hit the jackpot with the particular day we visited. The morning had been overcast and spotty with rain, but the afternoon cleared up, the sun came out and I thought I’d entered heaven. Best of all, was the coastline was *amazing*. Utterly breathtaking. 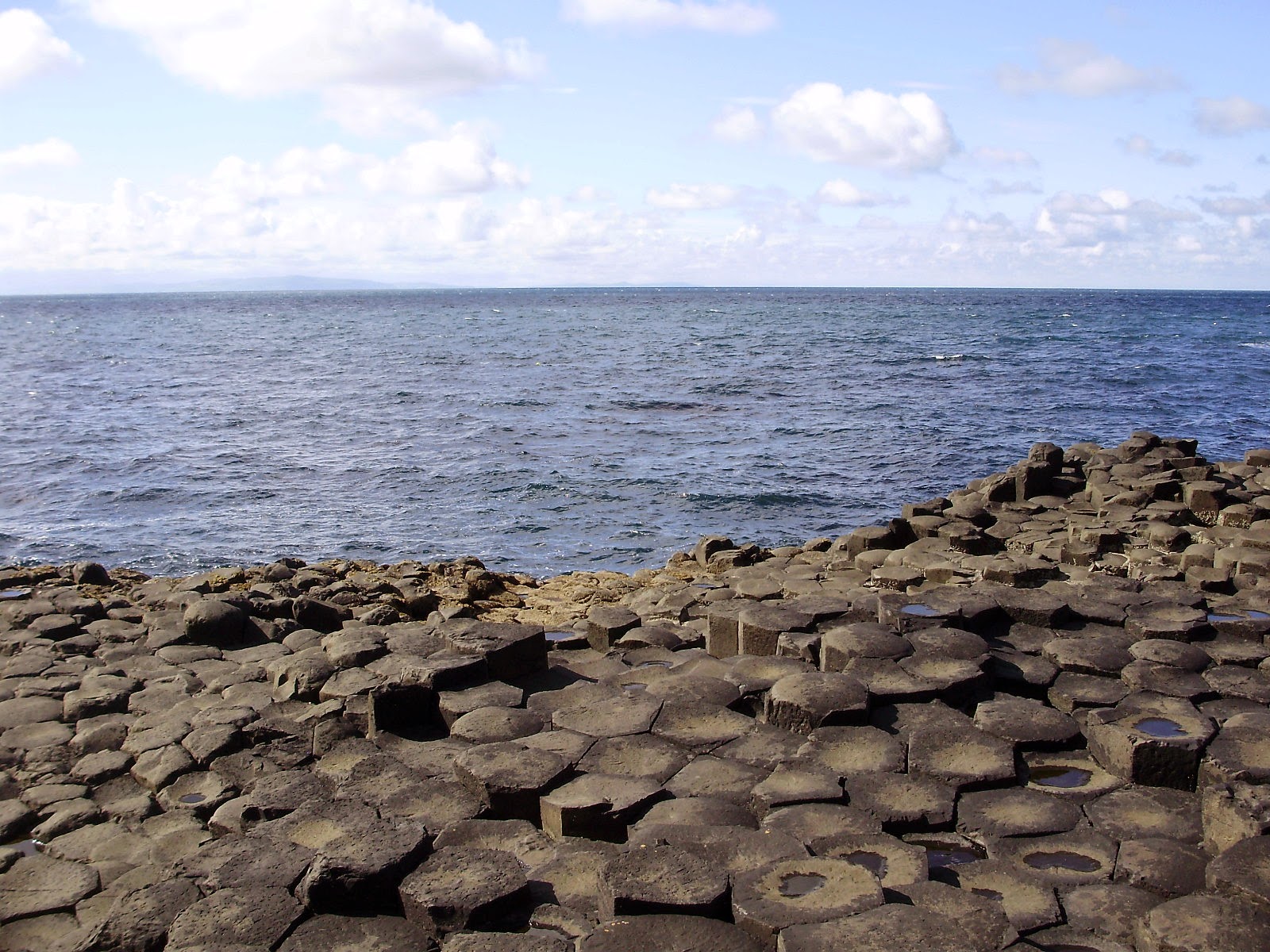 Sure, there was lush, green hills and plenty of it, but the hexagonal rocks and pillars were unlike anything I’d previously seen in my life. Add in a dark, sapphire blue ocean and it was the most perfect place imaginable.

There were plenty of lush green hills that are etched into my mind, and my friend and I found more than a few welcoming pubs and cheery, half drunk men and women to chat eagerly to. But even so, it’s the Giants Causeway and a few places like it that surprised me so delightfully simply because they were unexpectedly beautiful in a way I hadn’t foreseen. That is how I’ll remember Ireland.
Well, that and the Irish Coffee (with Baileys). Yum!

Obviously, there were a million more brilliant memories that I made in my time in the UK. I could go on about the beauty of Wales (if you haven’t been to the St. Fagans National History Museum it’s well worth it) or the Oxford Botanical Gardens, or Bath, or I could go on. Still, those are probably stories for another day. J

Special thanks to the Brit Babes for letting me hijack their blog!