I was lucky enough to be in Las Vegas for five days last march, and I kept a detailed account of that time to help me with the writing of Fulfilling the Contract, the sequel to The Initiation of Ms Holly. Though I had a rough idea of where the novel would go, it’s great fun to look back at those observations and see how they influenced the story, so I thought I’d share a few snippets of that travelogue with Brit Babe readers.
29 March 3:45 am Jet lagged and wide awake 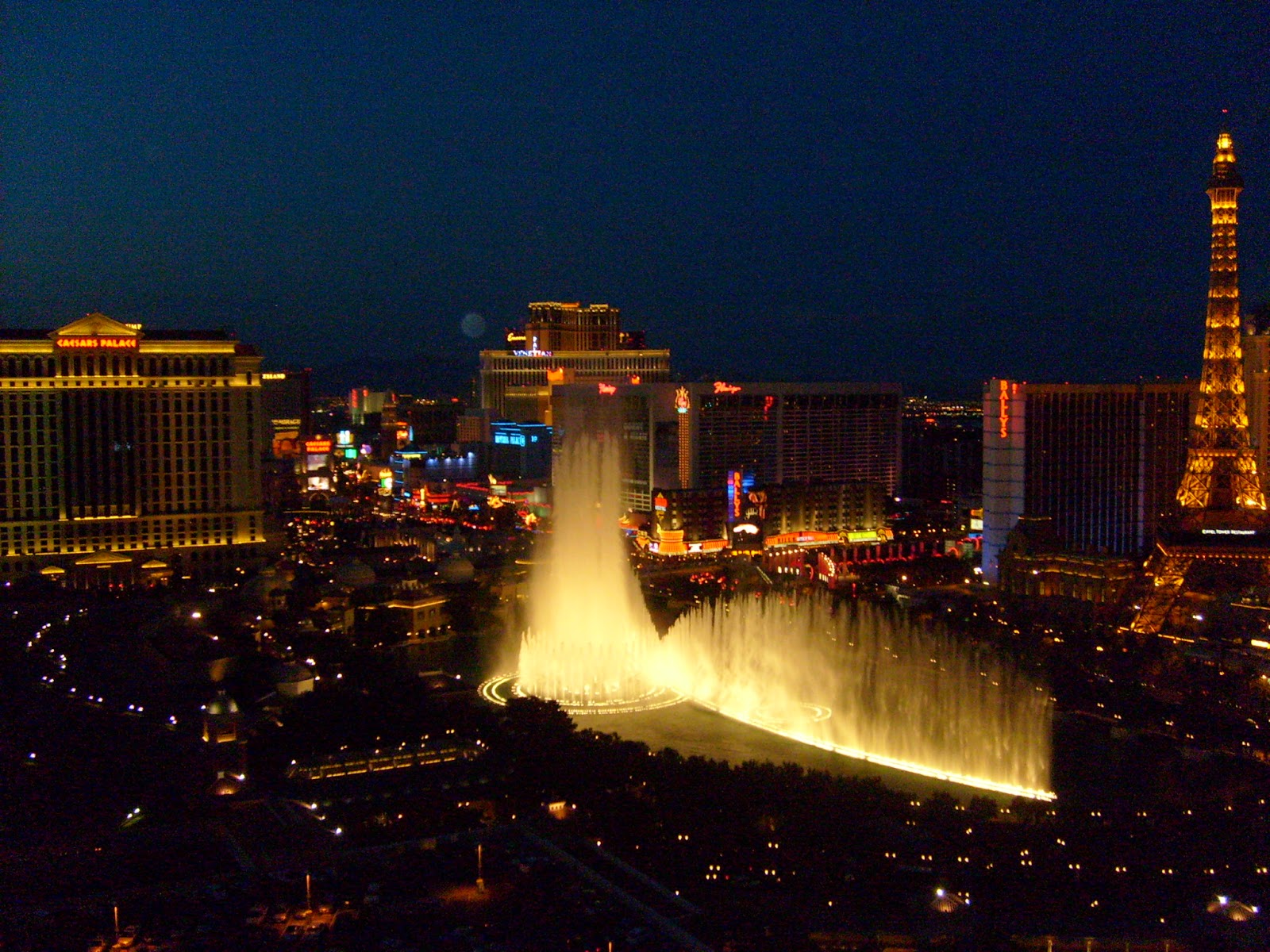 It's almost four in the morning here and I'm wide-awake. I'm on the 22nd floor, so have a fab view and have been enjoying the activity on the top floor of the parking garage below my window -- a clandestine rendezvous between a woman in a yellow Mustang and a man in a black SUV. Taking notes and letting my imagination run wild here.
Vegas never sleeps, and the lights change all during the night. I actually don't mind being jet lagged in a hotel room in some exotic place. It's sort of like the city’s been deserted and I'm the only one left to prowl. My head's slightly buzzy from not enough sleep, and it feels more like something really unexpected might come from that grey mass between my ears when I’m like this. 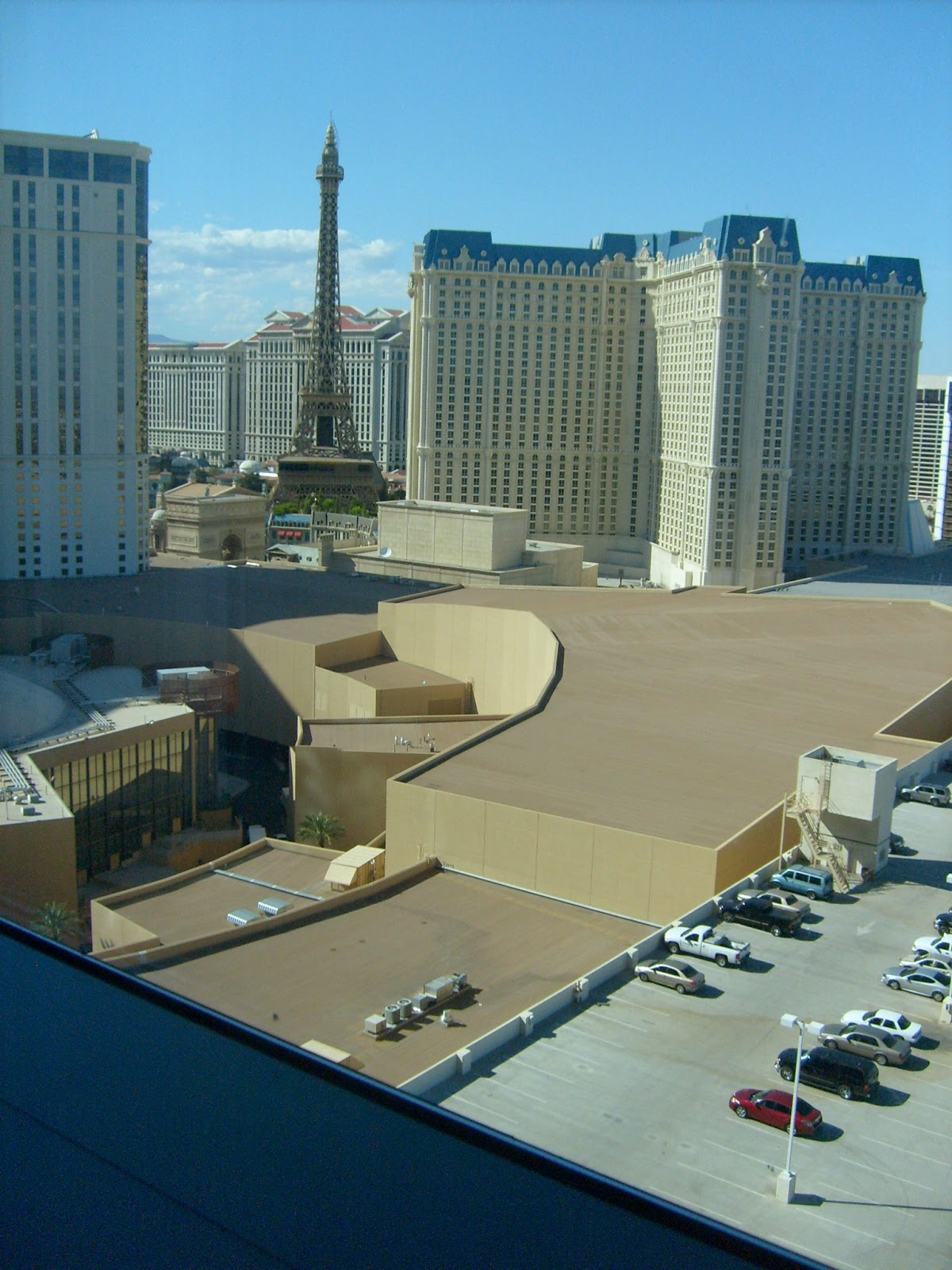 The landscape around here is so stunning. Approaching the city after flying over the Sierra Madre mountains, there are all these wild hogs back formations raising out of the desert floor and everything is a million shades of brown and gold and beige. Then Vegas juts up out of the desert like so many gigantic neon erections. It's just so brazen, skyscrapers and lights and swimming pools in the most desolate place you can imagine. It has OTT written all over it. You couldn't look out of place here if you tried. And I really think some people try. But it's this insanity and wild carefree grab the brass ring attitude where everybody's friendly and everybody's anonymous at the same time that intrigues me so much. And it's the fact that it's in one of the most stunning landscapes I've ever seen.
29 March late afternoon
I'm just in cooling down after a hot walkabout in the sun. You don't sweat here because it's so hot and arid perspiration dries and is gone before you know it, so you have to be really careful not to dehydrate. It just doesn't feel that hot until it's too late.
Desert Scent
It's hard to explain the desert smell. It's like if you could mix Rosemary and Eucalyptus with sand and high altitude. I know that sounds strange, but it's a lovely scent. It smells like that where my sister lives too, with the added scent of juniper and sagebrush and evergreen, those are the smells of my childhood, arid and thin and bright -- if you can smell bright.


Fire and Speculation
Thursday afternoon when I returned to my room, I looked out the window to discover roiling black smoke coming out of a building in the middle distance, a low, Mediterranean type building that I could just make out the word ‘casino’ on the front of. On closer inspection I could see leaping flames and I could see fire trucks with hoses and lots of emergency vehicles. They worked several hours to put the fire out, then even the next morning there was a fire truck still at work.

Of course with this being Vegas and the mob connections and all, I couldn’t help thinking that something sinister had happened. I later learned that the building was the Key Largo Casino and it was deserted. 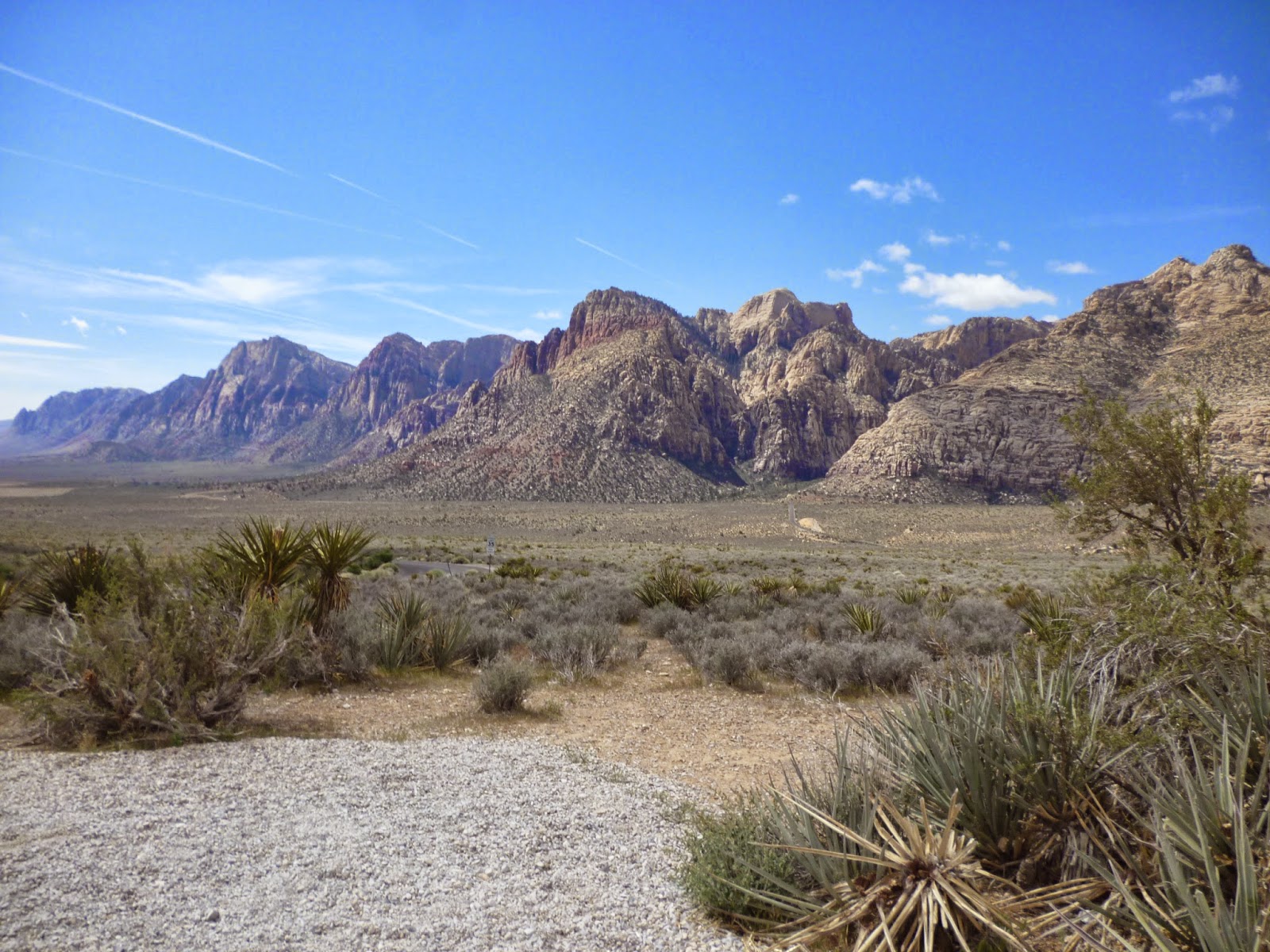 Nightfall
The desert sky seems huge all the time. The landscape seems huge. In fact Vegas itself seems a bit like a gnat on the rough pelt of some giant beast who doesn’t even notice its existence. Of course that’s not true. How can the presence of so many totally water hungry humans who are so excessive and extravagant with that precious elixir of life not cause the land to suffer?

Construction Site
Vegas is a giant construction site. Everywhere you look something is either being built or torn down. Every vacant lot or empty building has a sign on it or on the fence around it that says this area designated for a casino. 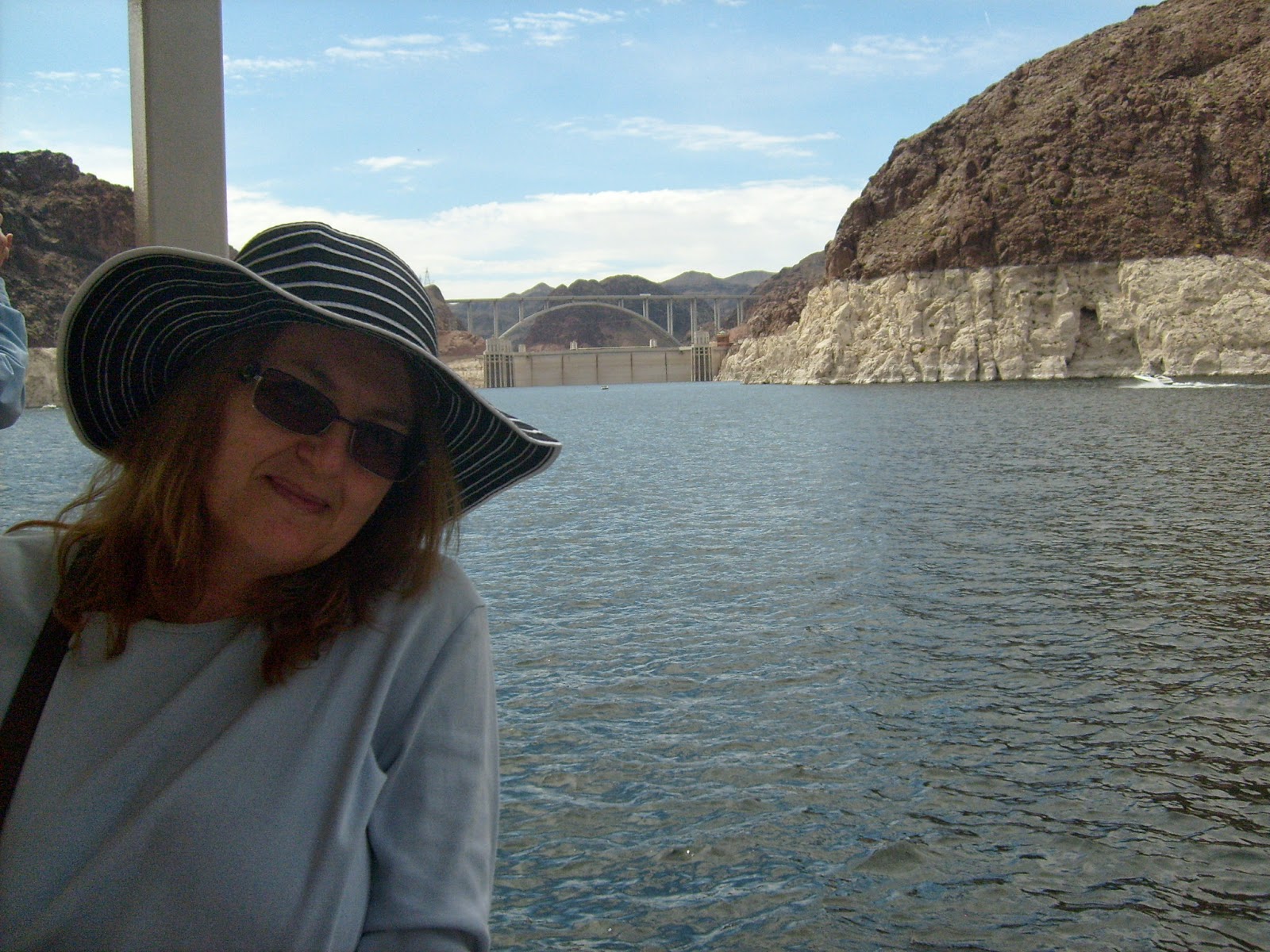 Lake Mead
Lake Mead is sort of a creepy place to me, with the rapid decline of the water levels the rocks are bleached white from the present level of the water up to the old level, a drop of 20 feet or more, and the shoreline has receded over a half a mile in places.

With the population in the area rising from ½ million people to 3 million in a short time the lake, which was originally created by the construction of Hoover Dam, for electricity, is being sucked dry. And yet, the tour guide told us that where he lived, he has a well, drilled down into the underground aquifer with an endless supply of water. This whole area was once an inland sea – reaching all the way to the Mississippi Valley. Stunning to think that just below this dry, seemingly barren landscape, the sea is still there.

Blurb Fulfilling the Contract:
Limo driver, NICK CHASE’s bad night gets worse when he picks up TANYA POVIC at a bar only to discover the explosive sex they share lands her in breach of her very strange contract. Blaming himself that Tanya will lose the large completion bonus earmarked for her mother’s surgery, Nick negotiates with her boss, the tough and mysterious ELSA CRANE, to allow him to fulfill Tanya’s contract and secure her bonus.
Elsa runs Mount Vegas, which offers voyeuristic pleasures for a price. Nick’s job, with Elsa and her quirky team, is to give clients something worth watching through the plate glass windows of Vegas’s luxury hotels and beyond. The learning curve is steep and kinky. As Nick and Elsa’s relationship sizzles and ignites more than hotel room rendezvouses are exposed. In this sequel to The Initiation of Ms Holly things get positively dangerous as Rita Holly and her team are called in from London to lend a helping hand. Bets are being placed. Will Nick fulfill the contract? Will he and Elsa take the gamble? And will they find a way to win at the high stakes, double or nothing, game of hearts? 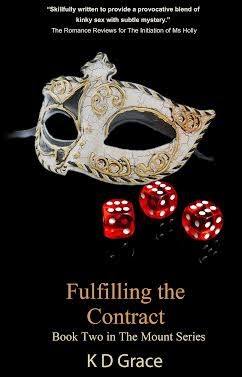 Excerpt Fulfilling the Contract:
‘Surely you can give Tanya one more chance,’ Nick said. ‘And really, it was my fault. I’d had a bad day and I wasn’t on my best behaviour.’
Elsa tossed the headset back onto the dressing table and rubbed the back of her neck. ‘Mr Chase, unless you want to fulfil Tanya’s contract for her, this conversation is over. It’s been a long day, and I’ve had enough. Pagan will escort the two of you back downstairs and since Tanya no longer works for me, I don’t care if you fuck her brains out. Now if you’d –’
‘Alright,’ Nick interrupted. ‘I will.’
Suddenly all eyes were on him. ‘Tell me what to do and I’ll fulfil the contract for her.
After all, it’s my fault she’s in breach.’
Tanya gave a little yelp that sounded like a kitten in distress and Elsa laughed out loud. ‘Mr Chase, you don’t even know what Tanya’s contract involves.’
‘I assume it has something to do with what’s going on in room 2031. It’s not prostitution is it?’
‘No! No, is not prostitution,’ Tanya said, the excitement nearly vibration through her voice. ‘Is nothing like that.’
‘Well actually it’s something like that,’ Elsa corrected. ‘My people get paid for sex.’
‘I don’t understand,’ Nick said.’
She nodded him over to one of the scopes set up at the bedroom window. When he balked, she nodded again. ‘Go ahead; check out what’s going on in room 2031.’
Nick nearly knocked the scope out of focus at his first view of the naked ass of a man pistoning his cock into a woman bent over a big bed. Her head was buried between the legs of another woman, who was pinching her own nipples for all she was worth and writhing beneath the serious tongue action.
‘Then they are prostitutes.’ Nick’s voice was suddenly a whisper, as though he feared he might disturb the people he viewed through the scope.
‘No.’ Elsa leaned close to him as though she could see over his shoulder. ‘They all work for me, and they get paid a lot of money to have sex with each other while someone else watches.’
With difficulty, Nick took his eyes off what was going on in the scope. He suddenly felt dizzy. ‘Let me get this straight, these people –’ he nodded around the room ‘– All of these people and those –’ he pointed to the scope ‘—have sex with each other and people pay money to watch.’
Elsa nodded ‘A lot of money.’
‘And that’s what Tanya was doing? That’s what the contract’s about, having sex and letting people watch?’
‘That’s what the contract’s about,’ Elsa said. With a smirk, she pulled Tanya’s red panties out of Nick’s pocket where he’d forgotten he’d stuffed after he’d picked them up from the parking lot at the Mango. She handed them back to Tanya and replaced them with a black business card, briskly patting his pocket as she did so. ‘I know how much you loath your job, Mr Chase, and I can almost guarantee you’d find what Tanya does a lot more satisfying. But –’ she ran a hand down and gave his crotch a quick grope ‘– It takes some serious balls.’
He elbowed her away and shoved past Tanya and Pagan. ‘You people are all crazy if you think I would … if you think I might …’
Elsa offered him a smile that he felt, much to his discomfort, right down between his legs. Then she lifted an eyebrow and gave a shrug that made the dark gloss of her hair shimmer in the subdued lighting. ‘You asked.’