Okay, I’d like to talk about casting for Stately Pleasures. I’m one of those writers that generally has a person in mind when I’m writing characters, especially if I’m writing longer pieces. So, for my first novel, I had two of my favourite sexy actors in mind for my lead males.

Jeremy Davenport is, in my mind, Jeremy Renner. See how I sneakily concealed his name there? LOL. Naturally, as Jeremy Davenport is terribly posh and British, the American accent is going to have to go, but otherwise, the Renner is my Jeremy.

Ethan Hayes is Jared Padalecki, no doubt about it. Tall, muscular, brooding, sexy. That long hair. Yum. Again, Jared’s going to have to figure out a way to do a posh British accent. But if he can do that, he’s totally going to be in the film.

Alice Brown is more difficult, really. She’s 30/31 (her birthday takes place in the book), and I haven’t really found any curvy actresses that are perfect for Alice. I think Melissa McCarthy is probably the closest I’ve found. So if any of you find a beautiful big girl who’s also an actress, just let me know and I’ll definitely give her a call when it comes down to casting for the film. When I was writing, I totally invented Alice—in my mind I didn’t have her as a certain actress, so it should be pretty easy to find someone to play her. Especially as she gets to play kinky games with Jeremy Renner and Jared Padalecki. Hell, I might just do it myself ;)

If you want to check out more photos of my inspiration, check out my Pinterest board:
http://www.pinterest.com/cw1985/stately-pleasures/ 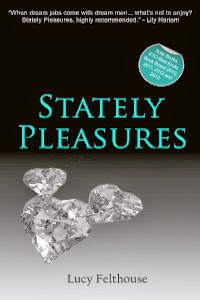 Alice Brown has just landed her dream job. Property manager at Davenport Manor, a British stately home. It’s only a nine-month contract to cover maternity leave, but it’s the boost up the career ladder she so desperately needs.

Unfortunately, things don’t get off to the best start, when Alice finds her boss, Jeremy Davenport, in a compromising position. Far from being embarrassed by what’s happened, Jeremy turns things around on Alice and makes her out to be the one in the wrong. So when he and his best friend and head of security, Ethan Hayes, then throw an ultimatum at her, she’s so stunned and confused that she goes along with their indecent proposal.

When the dust settles and Alice has time to think about things, though, she realises that perhaps it isn’t such a bad thing. There are worse things she could be doing to advance her career, after all.