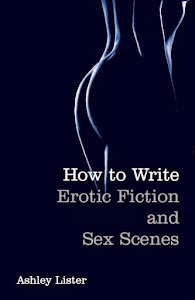 Hi - My name is Ashley Lister and I’m here to ask for help with a problem.

One of my students recently told me that, with my beard and bald head, I looked like Walter White from Breaking Bad. She’s going to do well. It won’t matter what drivel she submits for her end of term paper. She compared me to the greatest TV hero of all time and that’s enough to earn her a distinction in my book.

I mention this because I was discussing Breaking Bad with Lily Harlem at Eroticon in Bristol. The Brit Babes had been kind enough to invite me to join them for a meal after the first day of the conference. We went to a pizzeria and cider house on the banks of Bristol’s floating harbour. Because I always enjoy discussing narratives (an obsession with story is one of the banes of being a writer and someone who teaches writing) we’d ended up talking American TV shows. There are currently some great American TV series.

Earlier in the day Tabitha Rayne and I had been arguing about who was the sexiest character in the show. Tabitha said it was Gustavo Fring: something about his blend of menace and gentleness. I didn’t hear her rationale properly because I was shaking my head and telling her it was Walt.

But there’s a problem with Breaking Bad. It’s not the script or the acting. Those were first rate. It’s not the concept: cancer-diagnosed science teacher starts cooking crystal meth to help pay his hospital bills. That was a symbiotic blend of pathos and humour. It’s not even the warped values that it condones: such as the notion that it’s OK to use of flip phones.

No. The problem with Breaking Bad is that it was too good. Every show I’ve tried to watch since has seemed dull in comparison. My appetite has now been spoilt.

I’ve developed my taste-buds for TV on a diet of Buffy the Vampire Slayer, Angel and Firefly. I’ve gorged myself on Lost, Dexter and Deadwood. I tried the first season of Bates Motel and I found it innovative and compelling. I’m currently following Game of Thrones. It’s annoying that Game of Thrones isn’t remaining true to the storyline of the books, but I realise the relationship between page and screen can only go far.

But I’ve always been a glutton for good storytelling and now I want more.

So, if anyone reading this can recommend what I should watch next – something intelligent, exciting and able to help soothe the cravings of my Breaking Bad addiction – it would be greatly appreciated.

Thanks, Ashley, Breaking Bad is thought-provoking and addictive and we hope you'll come back and visit us again soon.